Walk 12 - A short walk though long grass: the Church Field

Almost a month since I last managed to fit in one of these walks, due to general busy-ness, so I'm feeling seriously deprived and looking forward to this one.  This is the first walk I've been able to do without getting in the car first, since the entrance to the field is ten minutes up the road from us.  The church field (so called because - ta-da! - it belongs to Holy Trinity church, Slad) is a curiously L-shaped field running steeply down the hill below the church and wrapping itself around the gardens of the houses on the Old Slad road.  It adjoins the Steanbridge estate on one boundary, and farmland on all the others, except for a gate at the apex of the triangle which goes out onto the main road.  It's this gate I'm now heading for.

The thing about the church field is that it isn't grazed or managed, except that the grass gets cut annually, which hasn't happened yet this year.  It's used occasionally for village events, such as the newly-traditional Easter Egg and Bonio Hunt (children and dogs welcome), but its steepness saves it from fetes worse than death or other more genteel activities.  Last time I saw it, which was from the Steanbridge estate boundary, it was elbow-high in nettles and other vegetation, so although it's warm and dry today, I'm wearing wellies, jeans and a thickish canvas top, and feel somewhat overdressed.

Which is OK, because the field is somewhat overgrown.  Even on the rough path which runs down from the gate, the grass, nettles and hogweed are knee-high.  As I climb over the gate, I'm greeted by a dunnock from a nearby bush, and a couple of bluetits, and a shower of small green grasshoppers bounce away from my feet.  The days have been hot recently, but at this hour of the early-ish morning it's cooler than of late, and slightly misty, with intimations of autumn.  I think this may be the last walk of summer.  The field already looks pretty autumnal - there are blackberries appearing along the boundary hedge and though there are a few wildflowers still blooming, particularly the knapweeds, the grass is browning at the edges and is full of seedheads.  I love seedheads - their shapes are intricate and more subtly interesting than the flowers that precede them.  I particularly like one which belongs to a plant which is common along this path and which I ignorantly accuse of being cow parsley.  Its seeds are clustered together in what looks like a particularly intriguing birds-nest.  Later research (this time I did look it up in the spotter's guide when I got home) reveals it to be wild carrot, a much prettier member of the same family.

The view from the top of this field across the valley towards Swift's Hill and the hamlet of Elcombe is one of my favourites in the valley, particularly on an atmospheric morning like this one, when the opposite hills turn blue and seem to float on the mist.  Most of the view is fields, with a dark line of trees below me marking the path of the stream.  A great squawking of magpies from one of these trees heralds the eruption from the tree canopy of a big buzzard, calling mournfully.  The field boundary away to my right is a fold in the land running down from the big hairpin in the road and hosting a small stream, audible but not visible from the road, which I mean to try to find today.  From up here, the church field looks like a large, shaggy and somewhat unkempt animal with flowers caught in its fur. 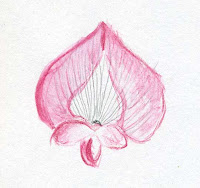 My progress down the hill is slowed by the detail that's all around me.  I remember thinking about a section of ground near Dillay Farm that it would be fascinating to choose a square foot of it and work out how many different plants were in it, and this is another place with that kind of density of species.  There is so much more here than just grass.  Here, for example, is a clump of many different seedheads, even less identifiable than usual (to me) without their flowers, but fascinating.  The whole clump is glazed with what I think must be slug-slime or similar, which sounds revolting, but shining in the sun is actually ethereally beautiful.  And here is a patch of pinky flowers which once again I feel ought to be something-or-other-vetch, amongst which are many small spiders going about their business.  That makes it feel like autumn - I associate autumn with spiders being much more in evidence, for some reason.  The pink flowers are shaped like medieval wimples and I stop to try and draw them.  It's one thing to admire a shape, quite another to commit it to memory, and a whole quantum step away again to transmit it from brain to hand and pencil accurately.  Why this should be, I don't know, but I think we see things in different ways.  There's one sort of seeing which registers an opinion, and a different sort of seeing - a much more intense seeing - which allows you to draw what you see.  For example, someone once pointed out to me that you can look at your watch and not remember what the time was afterwards, because you looked at your watch to answer the question 'have I got time?' rather than 'what is the time?' - apparently, answering the two different questions involves two different ways of seeing.

The path - which is more like a sort of green ramp - follows the curve of the field round underneath the gardens of the houses above and peters out close to a clump of trees which bulges out from the northern boundary.  Now I've been told that somewhere in these trees are the remains of an old silk mill from the days when this valley was part of the great British textile industry.  Silk mill?  I doubt that silkworms were cultivated in Gloucestershire, so I guess the silk was imported in its raw state for finishing here.  I can't imagine the economics of that but presumably there were some. 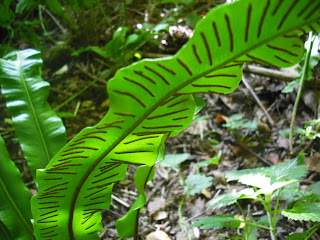 At first I think there's no chance of spotting anything man-made for the grass and nettles and general plant mayhem under the trees, but then I come upon a section of old stone wall, which has become part of the hill.  Ferns and ivy and whole trees are growing out of it.  And a little further along is a spring trickling out of a brick surround.  The ferns and plants clustering round it makes it look like a pagan shrine, not at all like anything industrial, but I'm guessing this may have been part of the silk mill building.  I'm struck by the light effects down here - green gloom punctuated by sudden shafts of sunlight which highlight the shapes and colours of the ferns, making them look hyper-real.

Exploring the bank in more detail I find no more signs of man-made things but some beautiful big trees and a barbed-wire fence, on the other side of which the old watercourse I walked up on my Steanbridge estate walk is clearly visible.  Turning downhill along the fence I seek out the stream, following an animal path that eventually disappears with a flurry of scrabbled-up earth under the fence which closes off the stream in both directions. Following the example of the unknown animal, I manage to roll under the fence in order to get close enough to the stream to record its placid burbling.  I'm inside the usual stream-shroud of hazels and willows but I can't follow the stream bank here because of the fence, and because the tree cloak is augmented by thorn bushes, so  I have to return to the grassland, outside the trees, avoiding nettles which, in some cases, are over my head.  The nettles are popular with tiny snails, if not with me. I come upon a real autumn sight; a hawthorn bush covered in brilliant red berries.  Or fruits.  Whatever.  Are these haws?  I know the phrase 'hips and haws', but now I come to think about it, I've neve known what 'haws' are.  'Haws' for hawthorn?  It seems logical.  There are also sloes.  At least, I think they are sloes.  (Never drink sloe gin made by me, just in case.)  The animal path I'm following winds back to the stream and spends the next few minutes playing cat's cradle with the barbed wire fence, which snakes all over the place crazily.  Presently I find myself on what appears to be a small island, the stream on one side and a shallow but definite ditch, with a small amount of water in it, on the other.  Crossing the ditch higher up is what at first glance seems to be another little arched stone bridge like the ones I've seen higher up the stream, but almost buried in the earth and accumulated leaf litter and with a tree growing on its head.  Looking closer, and feeling the cold draught coming out of it, I think it's actually a culvert of some sort.  I try to work out where it's coming from, but it's impossible to see because of the undergrowth.  I'm wondering, however, if it's something to do with the water system that drove the old mill.

This stream-and-ditch arrangement continues almost to the edge of the field and the main stream is really quite small here - it's amazing how much it varies in size along its length.  Just beyond where the two finally meet, I can now see where the tributary trickle, the one which comes down from the hill by the bend in the road, joins the main stream.   This little tributary winds in and out of this field and the next, where a huddle of young heifers are watching me.  When I amble over to say hello to them, they stick their noses through the fence for a closer look, whiffling curiously.  I can't resist their liquid eyes and neat, blunt noses so I stay to make a few scribbly drawings of them, probably providing the most excitement their day will offer.

My aim is to walk the final boundary of the field by following the tributary back up to the road, but this is easier said than done as it's well hidden in a melange of blackberries, brambles, nettles, hawthorns and general plant mess and I keep having to depart from it to avoid being ripped to shreds.  In the end, I give up and strike back across the hill towards the gate, wading effortfully through long, tussocky grass punctuated by scabious and cow parsley (aka wild carrot), arriving back at the gate hot and out of breath and feeling like I've covered a much greater distance than I have. 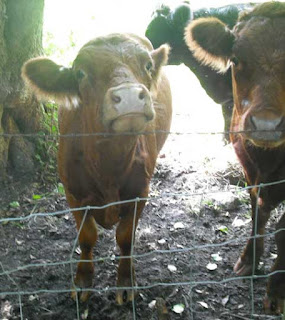