Early autumn now, with the sort of weather you would think normal for October, if last weekend hadn't been more like high summer with temperatures in the late 20's.  But today we're down to the middle teens, blowing a gale and alternating sharp showers and sunny intervals.  Sunshine has been in short supply this week, so now it's appeared I'm grabbing the opportunity to do this walk - a shortish one, like the sunny interval - through a field belonging to Painswick Slad Farm.

I'm not sure we're mentally prepared for autumn, what with an Indian summer happening at the end of September, but the valley is definitely beginning to look autumnal.  Hints of orange and gold are beginning to appear in the trees and there are already drifts of leaves lying on the ground.  The main road runs along the boundary of the field I'm about to walk through and whenever I walk up to the village I tend to stop by this wall because the view from here across the valley is another of my favourites.   It's an unusually open view straight up the valley, and both arms of the upper valley are visible as well as Slad village, the hamlet of Elcombe, Swifts Hill, the Vatch and indeed quite a lot of the ground I've already walked on this project.  It's one of the best spots from which to get a feel for how the valley works.

Normally this isn't a particularly peaceful spot because the main road is humming with traffic, but just now the road is closed for the repair of a major chunk of the retaining wall above the Vatch and the village is almost traffic-free.  This is a pain in the neck for day to day life, but has compensations for lovers of scenery and wildlife.  I've already seen - and heard - two buzzards moseying around above the trees which line the stream.   I seem to be seeing a lot of buzzards in the valley at the moment, so perhaps they bred well this year.

The stream is now running parallel with the road and forms the lower boundary of the field.  This is working farmland, so this field is mainly pasture and is currently home to five or six half-grown cattle.  Earlier in the year I spent a happy afternoon taking photos of young calves with the owner of the field, but these are not the same beasts, apparently.  I'm not even sure if these are the same as the ones I was hobnobbing with at the end of my last walk, which I reckoned were heifers.  Some of these definitely look like bullocks, if not young bulls, with little horns, so I'm hoping they won't find me too interesting.

Entering the field via a gate from the road, I walk diagonally across the steep slope towards the boundary with the church field and the point where I left off last time.  There's a beautiful walnut tree in the middle which is something of a landmark.  The tributary trickle which drops down from the bend in the road and winds to and fro across the boundary is much more visible from this side of the fence.  Sometimes it's a trickle and sometimes more of a steady seep.  At the point where it joins the main stream there is a row of big alder trees whose trailing roots have formed a one big debris-collecting raft across the stream so that the water finds its way around with difficulty. 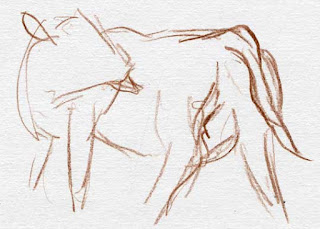 The bullocks who have been grazing by the stream are giving me very dubious looks so I walk slowly and talk to them in what I trust is a reassuring way.  Presently curiosity overcomes fear and they come over to have a better look at me, going 'mrrurr-mrrurr' and producing hearty smoker's coughs while shuffling their feet like bashful teenagers. Producing the camera causes them to sheer off temporarily but when I stay put, they sidle back and set about providing me with half an hour's distraction.  I like drawing animals on the move - more exciting, though hugely more difficult, than when they're sitting still - and the bullocks make delightful subjects, barging each other, play-fighting and generally larking about.  Eventually they get bored and wander off, by which time I have pages full of very scribbly and deeply disappointing drawings, but also a very vivid recollection of their shapes and antics.  This is the value of drawing for me - a way of constructing vivid mental impressions which can later be converted into something glassy.

I turn my attention back to the stream and start to walk along it, ducking in and out of single-strand wire fences.  The stream is fenced on both sides very close to its edges as if the water were a real no-go area.  It's quite broad here and the water is beautifully clear.  Despite the usual chaos of fallen wood  around it, it runs fairly unobstructed, except where narrowed by alder roots.

The defining feature along this stretch is the trees - mainly alder and willow, some of them very well-grown.  As elsewhere, it's like walking behind tree-curtains with only the occasional window through the leaves onto the sunlit fields beyond.  It's easy to over-use the word 'secret' in relation to this stream - I seem to do it every time I talk to the sound recorder - but in most areas it really does feel cut off from the world around it.  Here, with tree-free pasture on both sides, the distinction is even sharper.  This stretch of stream seems not so much secret as forgotten, with many of its trees falling into gentle decay.  Here is the massive stump of a very old willow, snapped off about 8 feet up.  Fence supporters have been screwed into its sides, ivy has heavily colonised its deeply-crevassed bark and rusty-winged flies are sheltering in its crevices.  Yet the tree is sprouting green again from the broken-off top.   (I'm always impressed by how tenacious life is in plants.  Except the ones I particularly want to grow in my garden, obviously.)  It isn't the only casualty of time here; there is a whole series of fallen-over, half-broken, ivy-covered, cragged and gnarled tree wrecks.  Their shapes loom weirdly in the green gloom and the sound recorder picks up gothic groanings where one ancient tree continuously rubs against the one next door.

My overwhelming impression of this stretch of stream is of a slice of raw nature sandwiched between two human-controlled areas - like a stratum of striped quartz running through an area of smooth rock.

It's dawning on me that I'm not properly dressed for this walk.  My mind was still in Indian summer mode when I set off, but not only are my light summer trousers not proof against the drifts of nettles, they aren't keeping me warm now that the sun has gone in and I can feel my camera-fingers stiffening with cold.  I step out of the light-and-shade world of the stream into the world of light and sunshine in hopes of warming up.  There is a good view from here of what I think of as the underside of the village - the back end of the pub and the gardens of the houses on the old lane.

The shadows of the trees are long now, at 4 o'clock, reminding me that it's getting late in the year.  At the far end of the field there is a row of 7 or 8 massive alders, some of them double trees, along the stream edge.  For some reason the pasture marches right down to the stream here and there is very little undergrowth between the trees so that the low sun can shine between them onto the water.  I take this rare opportunity to photograph the stream itself in sunlight - along much of its length, in the shade of the trees, it looks too amorphous for interesting photos.  I also try to capture the magnificence of this row of alders and run up against my lack of photographic expertise and the problem that if you can get the whole tree into the shot, you're so far away that it tends to come out looking small.

On the field boundary, something unexpected happens.  The stream suddenly plunges over a waterfall and literally disappears, perhaps into a culvert of some sort, in the garden of (I think) Upper Vatch Mill.  So that's the end of my section of stream for today and time to walk home along the road, admiring the effect of the golden late-afternoon light on the stone buildings at this end of the valley.