This is my fourth 'second pass' walk and this time I'm revisiting the lower part of Dillay Farm land, from below the farmhouse to the boundary with the Snows Farm nature reserve.  The last time I was here was in early summer, when everything was in leaf.  So now I want to see it without either leaves or undergrowth. This is a day of sunshine and cloud; there are few new leaves to be seen elsewhere in the valley, but not here.

Last year, this part of the valley was unusually dry, and I could walk right up to the stream below the farmhouse.  When I was here six weeks ago to revisit the upper part of the valley, the stream here was fast held in frost, and a large area around it was sparkling with frozen bog.  Now the stream is running free and the bog is quite definitely a properly boggy bog.  Good thing I brought the wellies. 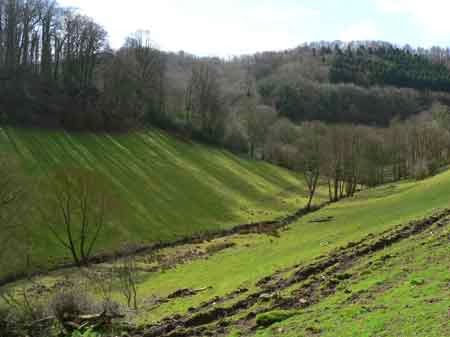 Pursued by a cacophany of barking dogs and squawking geese at the farm, I walk down through the field, cross the stream and follow it south to where it enters the wood just below a track. The steep fields on my left hand are barred with long shadows from the woods above, where a patch of olive-green fir trees float amidst a sea of buff-coloured leafless beeches.  Down by the track, it's now possible to see exactly what happens to the water at this point, which I couldn't figure out last year.  The main part of the brook disappears into a pipe under the track, but a small tributary comes in from the right and another from the left at almost the same point, from the side valley past Rose's cottage, so that what we have here is a stream crossroads. The ground between the streams is covered in mini-plants, a pattern of many small new leaves, including the promise of nettles, but at present they are no more than a pretty pattern on the ground.

By walking a little way up the track going westward, I find some beehives, which I don't remember seeing last year, and surprise a small vole or mouse which goes leaping for cover underneath them.  Good move.  I'm not going closer to look for him there.  Just below the beehives another small stream seeps out of the hill and heads for the main brook.  The ground is boggy here, too, and a strong medicinal smell arises from the plants my wellies are crushing.

Lower down, yet another small stream seeps out of the ground close to the track and runs parallel with the main brook, turning an area of ground into an almost-island.  The ground here is covered in baby nettles and was pretty much impassable when I was here last, which may be why I missed this extra stream, or perhaps it wasn't even here in the drier weather.

Walking by the water rather than on the footpath is looking like a possibility at the moment, so I decide to continue at this level, on the western side of the smaller stream.  It all looks quite different from before, with very little undergrowth.  This area belongs to the trees just now and the stream winds around and through them.  I'm guessing the ground is honeycombed with  springs because there seems to be a lot of bog and bog plants, especially whatever makes the medicinal smell.  The further I go, the swampier it gets, and the deeper and steeper the channel in which the stream flows. 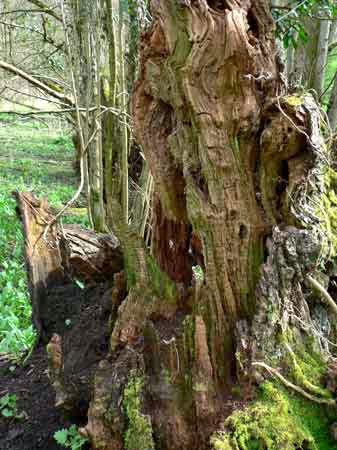 This time of year is definitely about shape rather than colour; what colours I can see are shades of green, buff and brown, with the odd patch of brighter, more saturated colour on the exposed innards of broken tree stumps, a deep coppery colour, or patches of bright green new moss.  There are an awful lot of tree stumps, in amazing shapes and colours.  Last May, I saw this as a tree cathedral,  but this time it's more like a building site.  An image which is assisted by some serious mechanical noises from the farm behind me.

It really is tree-stump-ville here; I count one stump for every three trees, all naturally fallen-over rather than cut down, as far as I can see.  Some of the smaller ones are like bits of broken eggshell, completely hollowed out, and ringed about with teeth of shattered bark. Seeing four particularly bits of tortured-looking wood in a row reminds me of a petrified forest I saw last year on the island of Lesbos.  I pause to try and draw some of their details.  The farm noise has now stopped and its so quiet, even the birdsong seeming muted, just the small trickly sounds of the stream finding its way around fallen wood and tree roots.  The sound of the stream is the sound of obstacles - I suppose that if there weren't any, it would make no sound at all.  It's quiet enough for me to catch the distant sound of a tawny owl hoot - you do hear them sometimes in the daytime, and the last time I heard one was also in this part of the valley. 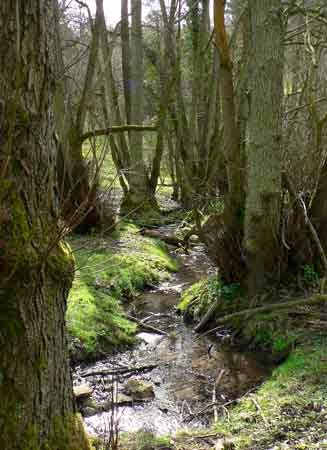 Following up the remains of an old track, partly blocked by a fallen tree, I discover a lone clump of primroses, and a tiny patch of the first bluebells of the year, just five of them.  There's an enormous amount of fallen wood.  The stream itself is so crossed and re-crossed by branches that it seems to be wearing a wooden hairnet.  Does it matter if the stream is not looked after, if no-one clears it of dead wood and fallen trees?  Humans have a great urge to manage things; a friend of mine in the village who was formerly a head forester for the National Trust subscribes firmly to the 'let it be' school of forestry.  While I'm pondering this, a buzzard takes off from a tree close by, sailing by on absolutely silent wings.

I find what looks like the shoulderbone of a pheasant, well picked clean.  And there was me thinking I might get along the Dillay this time without finding anything dead.

Another smaller stream runs off the hill here, and abruptly the main stream arrives at a very definite fence, running right across the water.  Is this the boundary with the nature reserve?  The only way to check is to walk up the fence to the footpath above.  I attempt to cross stream by standing on what looks like a solid log, which promptly tips up at the same moment that the branch I'm holding onto breaks, causing a sudden scramble through mud and water.  The fence goes round a few corners in its path up the hillside, and in one of them there is a curious little door, not more than a foot high, at the base of the fence.  For rabbits? Small dogs?  Hedgehogs?  A squawk in the undergrowth gives me a clue; it's for pheasants, of course.

The fence comes joins the footpath some distance into the nature reserve.  I remember thinking before that it's surprisingly difficult to work out where you are in this bit of the valley.  At least I now know I've pretty thoroughly explored this part of the brook all the way from the farm to the nature reserve. 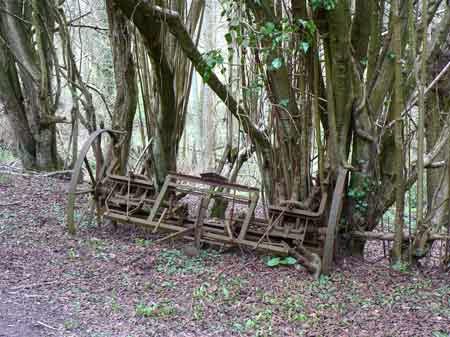 Walking back along the footpath I notice a lot of deer slots - they obviously find it easier to follow the paths sometimes too.  There is a serried row of willows, all leaning over the path at the same angle, like a sideways arch, their structural shapes particularly noticeable at moment without their leaves.  There is a chunk of old farm machinery pushed up against their trunks, and now the same colour as their bark, so almost disappearing amongt them.  Ahead of me, I hear the daytime owl again, and an explosion of jackdaws.

Rose's cottage looks ever more broken-down and sad; a patch of daffodils are blooming in what must once have been the front garden, now just a chaos of weeds and rubble.  And now I'm crossing the fields again below the farm, and being greeted by another volley of excited barking from above.  I notice for the first time how each staccato sound is answered by an echo from higher up the valley.  I must be standing in exactly the right place to hear it.  This walk seems to have been all about sounds and shapes.