It's a warm, verging on hot afternoon, near the end of March.  The whole week has been warm, with blue skies and sunshine every day.  A drift of daffodils beside me, and the leafless trees, say spring, but the temperature says summer.  I'm standing in the car park of Rycote Microphone Windshields Ltd, in Libby's Drive, Stroud.

You'll recall that the Slad Brook was last seen disappearing into the back of this industrial estate.  Unfortunately, I wasn't able to get permission to access the stream from the northern section of the industrial estate, but the owners of Rycote have been more than kind in allowing me to follow it through the land beside their factory.  And after a brief session with an attentive salesgirl, I'm trying out one of their microphone windshields - there always seems to be a breeze in this valley and so far it's featured quite prominently in lots of my sound recordings.  The shield makes my little mic look as if it has aspirations to be a teddy bear and it no longer fits in my pocket, so I hope the extra furriness is worth it.

For most of its journey through the industrial estate, the stream is underground, so I don't think I've missed much.  From the corner of this car park, through thick bushes, I can just see it emerging from the culvert under a stone arch.  It's now in a very much deeper, partially-stone-faced channel, and what with the depth and the undergrowth it's impossible to get closer to it here.

I'm now very much in the outskirts of Stroud - on the hem of Uplands, to be more precise - and there's a certain amount of man-made noise around.  However, this is a surprisingly peaceful site, and I can still hear the stream and the bass humming of a large, fat bumblebee moseying about in the blackthorn blossom.  All the excitement of microphone-windshield-making goes on inside the long, low building in front of me, but none of it seems to spill into the outside.  The stream runs along the edge of the site, through the car park, past the factory, and alongside a largish area of grass at the back of the building, before disappearing into a housing estate.  By the look of things, no-one disturbs it much.  It's flowing in a channel some 6-8 ft below the car park level with steep banks on either side, lined with trees as usual, and I can find no easy way to get down to it until I get to the grassy bit at the back of the building.  Here, the brook is flanked by two huge willows, their furry buds just bursting, and there's a flattish area beside it.  With some caution, I clamber down the bank.  It's not difficult, if you don't count putting my hand on a baby nettle by accident (which I do).  Once down at stream level, I feel as if I'm in hiding.  This is a spot which just asks to be sat in, looked at and listened to, and here is a fallen tree across the stream, perfectly positioned for sitting. 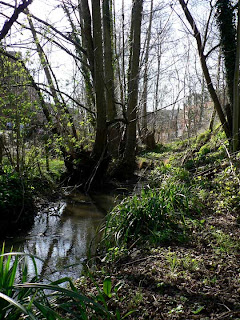 So what can I see and hear?  There's now a section of field at the top of the bank on the opposite side of the stream, barely visible through trees and thickets of bramble.  A narrow animal path winds through it close to where I'm sitting, and leads to - a traffic cone.  A splash of incongruous colour amongst the brown undergrowth, and another intimation that we're not far from town here.  A surprising amount of birdsong spills out of the trees, much of it from a chiff-chaff.  I think of the chiff-chaff as a Bird of Mystery.  It was one of the first birdsongs I learned to be sure of, and I hear them all over the place in this valley, but never see them.  There are also stereo wood pigeons, one on each side of me, bass backing for the staccato chiff-chaff.  It's just in the last 2-3 weeks that I've begun to notice birds other than robins starting sing - robins seem to keep going all winter, but you know it's spring when everyone else starts to join in.

There are bits of broken stone lying in the stream here, and a couple of big slabs on the bank.  Not enough to be anything identifiable and too moss-covered to guess at their age, but there was another mill here, so they might be its very last remains, who knows?  The stream is not very efficiently fenced with barbed wire on this side and very efficiently fenced with brambles on the other side.  Barbed wire intrigues me for the intricacy of its shapes.  It's forbiddingly aggressive, but can be oddly beautiful, in amongst greenery like this.  A series of largish willow trees marches along the bank, each one wears a miltary-style metal dog-tag with a number, which is curious.  I wonder who keeps track of them, and why.  Is this some sort of Health and Safety thing?  Is each of these trees on file somewhere, its condition the subject of regular check-ups? 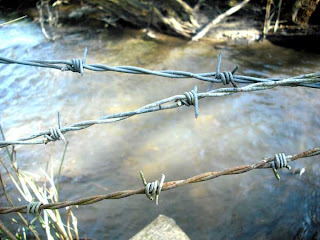 The stream looks a bit low, to me, showing an underskirt of mud below the greenery on the other bank.  The bank on this side deep in old leaf litter, clumps of reed-like plants which make a distinctive rustling sound, and patches of what seem likely to turn into yellow irises.  Oh, and bits of last year's fireworks.  I climb rather intrepidly round and over a big area of fallen wood and undergrowth to reach the next section of the bank.  Here, something has been digging.  Could be badgers, even though we're close to Stroud - I've heard stories of badgers wandering into people's houses along this outlying edge of the town.  And it seems likely that the stream bank here would be used as an animal highway, being so well-hidden and generally ignored.  In fact, I imagine this bit of stream having quite a life of its own.

The stream itself sparkles with rippled sunlight, fretted with long, pin-sharp tree-shadows.  I walk on to the furthest part of the bank I can actually reach.  Beyond here, the bank becomes too steep to navigate, turns a bit of a corner, and then disappears into the housing estate.  Through the leafless trees, I can see the silhouettes of houses, like distant mountains.  It's all surprisingly wild and lovely, a patch of rampant nature right in the arms of the town.  I make an extremely unsuccessful attempt to capture the scene in watercolour, dropping half of my new watercolour pans into the brook.  Decide watercolour is not my medium.

Bullfinches are whistling shyly from the trees above me.  I spot a parson-in-the-pulpit, aka lords-and-ladies or wild arum, a plant which fascinates me for its shape and slightly unsavoury reputation (traps flies overnight for the flower equivalent of kinky sex-games).  Scrambling back up the bank, I follow a little animal path along the back of the grass patch as far as Rycote's boundary fence, where the path proves it really is an animal path by disappearing under the fence, where I can't follow.  So there's nothing to do but retrace my steps to the car park, where a grey squirrel delights me by posing on the bank of the stream, rearing up on his hind legs to gape at me as if the human shape is altogether new to him.

This has been a most unexpected walk.  I'd assumed, from what I could see from outside the site, that I'd be making a quick stroll along concrete paths to peer at the stream from above.  I didn't anticipate finding yet another beautiful bit of secret stream. 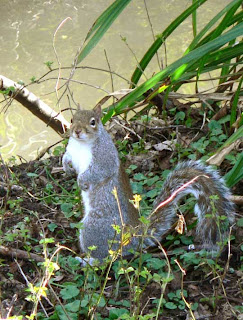