Yesterday was Candlemas and someone in the village quoted the old Candlemas rhyme to me: 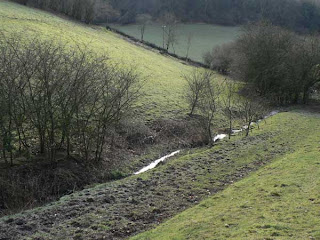 Since yesterday was sparklingly sunny and bright, it looks like we're in for more winter.  Today's weather certainly suggests as much - another frosty morning after a bitterly cold night,-9 degrees C the minimum.  We've now had three nights of low temperatures in a row and 'my' birds have stopped pottering around in the woods and started queueing up at the feeders in earnest.  You know it's really cold when the robins call an uneasy truce instead of fighting each other beak and claw over the fat balls.  After that false spring in January, winter seems to have arrived in haste, rolling up its sleeves and stamping its feet to prove its keenness.

So here's another opportunity to see what the valley looks like under frost. The outside thermometer is still hovering around -6 when I leave The Vatch at about 10.30 a.m. and I have so many layers on that I feel like a polar bear. Possibly a polar bear pretending to be a Christmas tree as I am hung about with the usual techno-kit including extra batteries in case of camera sulks.

This time I'm going right back to the beginning of the Dillay valley, starting with the steep track down from the village of Camp.  It's not a morning for hanging about, or for the nice slow pace which doesn't alarm the local wildlife, and the mud beneath my feet crunches with ice as I stomp along.  A squirrel scolds from a tree close by, sounding like someone imitating a duck rather badly, and a posse of pheasants goes whirring across the path in noisy alarm.  Half way down the track I stop still to record the sounds around me.  The sudden quiet is loud in my ears after the noise of my own steps.  The icy air is very still, and the various woodland noises are isolated sounds, not the general background concert I remember from spring.  Among them I pick out the sound of a woodpecker, tapping rather apologetically, as if nervous of being heard. After a moment, I spot him, high up on a bare beech tree.  After a brief struggle to disentangle binoculars from camera I can see that he's what I think of as 'the red one', i.e. a Greater Spotted.  As I turn away, a rabbit dashes up the bank ahead of me and disappears into a hole underneath the stump of a felled tree.

It occurs to me, as I continue down the track, that I do have something in common with the birds.  They react to movement, especially fast movement, and so do I.  In all this wide vista of winter trees, my eye picked out the tiny but unusual movement of the woodpecker drumming, the rabbit running.  It helps that the trees have no leaves and the bank is bare of undergrowth, of course.

Before it started freezing, there was a fair amount of rain, and there are plenty of puddles down here, now frozen like the mud.  The ice has obviously partly thawed, then re-frozen, more than once, forming swirling patterns like contour lines and dark, meandering cracks.  Some of the puddles look like sections from an OS map.

Once I've slowed down to photograph the puddles, I start to notice other details, leaves with all their ribs picked out in frost, the colours of flaking bark, intricate lichens, but the temperature keeps me from getting enmeshed in close-up stuff because in less than the time required to take one photo, my fingers are benumbed. 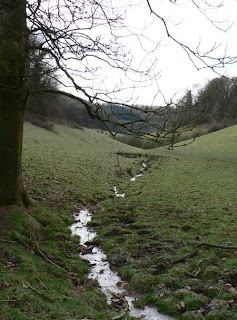 Over the stile at the end of the track and into the field and here is the grove of hawthorns where the stream rises.  The water from the spring is running, but fringed with fragments of ice, and only a little further on, where the fledgling stream emerges from the trees, the surface of the water is frozen.  I can see the water trying to find its way underneath, seeping in odd patterns through the ice.  I am trying to record this process as a video when a great racket erupts at the treeline which turns out to be a right royal squabble between two blackbirds.  I can see them flying at each other, and then literally scrapping on the ground, turning over and over in a flurry of wings and squawking. One loses his nerve and breaks away, and is chased off noisily by the winner.  As usual, I haven't managed to get my hand to the sound recorder in time.

When I did my first walk here, the trees were only just beginning to green up, but the atmosphere was quite different.  Then the valley felt active, life bubbling up everywhere.  Now it feels quiet, submerged, the hatches battened down.  It's now 11.30 am but the sun is only just struggling over the treetops at the valley rim.  The trees are stark, their structure darkly beautiful against the washed-out colours of winter sky and grass and the remnants of scrub.  Numbers of blackbirds are rootling in the leaf litter and appearing from between the roots of trees.  I wonder if they have been sheltering from the cold there, or if they are finding things to eat down by the roots.

The further down the stream I walk, the thicker grows the ice, and the more opaque, the shadows of imprisoned rushes and remnants of leaves underneath it.  All the beach leaves in the valley seem to have blown to the stream, lining the white ice with a coppery border. Some of the leaves are half-caught in the ice and are rimmed with long ice crystals like strange teeth.  It's odd to see the stream silenced like this.  A buzzard drifts overhead, its mournful cry puncturing the quiet air.

There's a tree growing by the stream here which I remember from my original walk - its handsome outline dominates the view from the head of the valley, and it looks even more striking without its leaves.  Climbing higher up the eastern slope of the valley to get a photo of the whole tree, my eye is caught by a white shape on the opposite bank.  It turns out to be a dead sheep.  Recently dead, at a guess, since nothing's had a go at it yet.  A victim of the frost, perhaps.  It's lying peacefully on its side, well away from where the rest of the flock is spread about the lower part of the valley in front of the farm, as if it wandered away to die.  Well, animals do that, they say.  Every time I've come to this beautiful part of the valley, there's been some vivid reminder of the precariousness of life. And just down the slope, by the stream, is another; a complete set of wings, spine and rib cage of a pheasant, still bloody, shockingly colourful against the drab ground.  I feel sorry for the pheasant, but find it difficult to be partisan; on the one hand, one dead pheasant, but on the other, one well-fed fox (presumably) who may therefore survive to spring and to breed.  OK, maybe a little partisan; I confess I quite like foxes.

I'm glad I climbed up the hill to check on the sheep - you get quite a different view of the valley from here, and with the sun now slanting straight into my eyes, all the contours are thrown into high contrast.  I can see where all the tributary streams are.  These are also held fast in ice, I discover, when I go to look.  Between the dark bars of the willow-skeletons which lean over it, slivers of icy stream shine in the sun like shards of broken mirror.  And where the side valley comes down from Nottingham Scrubs, a wide swathe of the valley floor sparkles silvery with iced-up bog. Even down by the footbridge, where the stream is wider, it's still covered in intricate ice-doilies, though the water can be seen trickling through underneath.

I make a quick foray across the shoulder of the hill and down to Rose's cottage to see what's happening where the stream goes into the deep woods.  Bereft of its softening cloak of greenery, Rose's cottage looks less picturesque and more disturbingly broken than when I last saw it. The spring is ice-free, and with less undergrowth I can see the whole length of the small tributary which runs past the cottage to the main stream, which is also ice-free here, where it's wider and deeper and running underneath trees.  That seems a good place to turn back, where the stream escapes from the ice.

On the way back, I notice how much of the floor of the farm end of the valley is boggy.  That reminds me that I first came here we were in the middle of an unusually dry spring, and all this was then dry ground.  Presumably it's now getting back to normal.  Then, I was quartering this ground marvelling at all the species growing in it, but now, if it wasn't frozen, I'd be sinking up to my ankles, by the look of it. 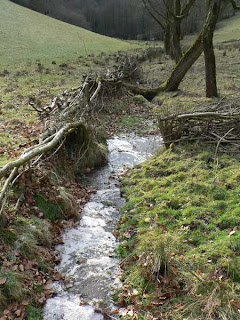 Up by the farm, I'm gawped at by sheep, fat and cuddly in their winter wool, and reluctantly squawked at by some unusually reticent geese, who clearly think I'm more dangerous than they are.  Further down the track is a lot of frozen mud, temporarily preserving sharp impressions of the feet of what looks like most of the valley's animal and human occupants.  Here a dog, there a sheep, and here something webbed that looks too small for a goose - a duck?  A seagull?

From the woods at the head of the valley, I catch what I'm sure is a single tawny owl call.  I've heard them in the daytime before, but never managed to record the sound to prove it.  This time is, of course, no exception.

Here's a funny thing.  When I was walking down the valley, I had the the sun in my eyes.  Seeing everything in high contrast and through a golden haze endowed the scene with magic.  Coming back up, with the sun behind me, it all looks pretty, but somehow prosaic.  The sun is up, the cold enchantment is gone.  A good time to go home for lunch.