A new year, a new set of walks.  Although I've not yet been able to finish my first full traverse of the Slad Brook, because I haven't yet been able to get permission to walk the last part of the brook as it approaches Stroud, I've decided to get cracking on what I'm calling the 'second pass', revisiting selected parts of the valley to see them at a different season, under different conditions, from how I saw them the first time.

So here we are, at 7.30 am on a freezing January morning.  It's minus 5 degrees when I leave the house and everything is thick with frost.  Winter has finally arrived, if temporarily.  To look at it now, you wouldn't think that for most of this month it's been 10 degrees or more during the day and last week the birds were clearly thinking about nesting, to judge from the racket of birdsong in the garden. Clear skies arrived a couple of days ago, and with them sunshine and frost.

My aim today is to see the valley under frost, hence the early start.  I've decided to head to the Snows Hill nature reserve because I have a yen to see the long view of the valley you get from the north western side of the reserve. Within minutes of leaving the car, my fingers are frozen.  Photography is clearly going to be more of a challenge than usual.  I also intended to do some drawing.  Hmm.

As I climb over the stile by Snows Farm, the dawn is showing red above the hills ahead of me; away to my right, a crescent moon is paling into a duck-egg blue sky. There's a faint rumble of early-morning traffic and other human starting-the-day noises in the distance; otherwise it's very quiet - none of the bird-chatter that greeted me in my own garden.  The air is sharp but still.  The ground is hard and nubbly with frost.  The bones of the land are more than usually visible; the raised lines of the former track that leads down to the Roman Bridge stand out clearly in the field before me.

By the time I reach the entrance to the reserve, a great tit is trying out his voice in the trees by the stream.  I try to keep my own noise to a minimum, in hopes of seeing deer or similar, but it's extraordinarily difficult to walk quietly on frozen ground.  I crunch and clump my way forward like a herd of rhinos in a wrapping-paper factory. Pheasants whirr away from me, shrieking a warning to anyone who hasn't already heard my thunderous progress.

I'm walking northwards on the western side of the stream.  Here, the frost is light, but on the other side of the valley the sun has clearly not penetrated at all and three days of frost lie as thickly as a sprinkling of snow.

My goal is the grassy bit from which the valley drops down to the stream so steeply that it's almost like a cliff.  Here I sit down on one of the strange grassy hummocks dotted about this area.  (Anthills, they are, I later discover.)  Anyway they make good (if chilly) seats.  The view I came for, the long view down the valley, is a symphony in black and brown and white, like a sepia photo with the contrast turned up.  My technology is complaining about the cold - camera batteries don't like minus 5, apparently. So it's back to manual methods of recording.  Out come the sketchbook and watercolour pencils.  Fingers don't like minus 5 much, either, but I talk them into it.  Just a quick sketch, OK?

Actually, it's my kind of scene.  Few uncertainties in this landscape, lots of shape and no confusing colour; even the undergrowth has a clear form, and the frost follows lines which reveal the shape of the field.  Leafless trees stand out like punctuation marks.  In the frost-laden field opposite, the resident posse of ponies stand about looking more than usually solid in their winter rugs.  I have background music for my work from a song thrush (I think) in the trees down by the stream. One of his repeated phrases reminds me of my Spanish language homework - 'todavia, todavia, todavia' he seems to be saying.  A pheasant glides silently past me down the valley, unexpectedly graceful.  You don't often see pheasants just gliding, as opposed to the loud, clockwork-toy-whirring flight you get when you disturb them.

There's no incentive to over-work this sketch; I stop when my fingers (and seat) go numb.  I'm hoping the sun will appear over the hill in the next half hour or so and light up the valley, but staying still is no longer an option, so I walk on into the reserve.  It looks very different from how I last saw it, back in the summer.  With no leaves on the trees and all the undergrowth dying back, the structure of the place is much clearer.  Even from up the hillside I can see the stream through its necklace of trees and I can see all its crossing-points.  Footpaths are stark lines on the frozen ground.  I wouldn't have got so lost if I'd done my first walk now, rather than in summer when everything is swathed in undergrowth.

The shape and extent of the Old Shop ruins are also clear to see, as are a large number of small, scrabbled holes in the ground within the walls.  They are just scrapes, as if someone was trying to lay bare the roots of the plants growing there.  Rabbits?  Badgers?  No sign of the great tits who nested here earlier in the year, or of the foxes whose earth I spotted in the copse beyond.

I loop down to the stream which threads its way through a skeleton of willow and alder.  To me, it's more beautiful with its bones exposed like this than it was when the trees were all green.  Its banks are covered by a carpet consisting of equal parts dead leaves and live tiny plants, all their details picked out in frost crystals.  As the close-up camera seems to have pulled itself together now, I spend some time capturing these intricacies.  Detail, you see - I can't resist it.  The frost effect has the same appeal for me as glass engraving; it makes ordinary things look extraordinary, and hyper-real.

Across the stream on the south-eastern side of the valley the frost is even more extraordinary in close-up.  Three successive unthawed frosts have lengthened and thickened every ice crystal until twigs and grasses look as if they're wearing a very chilly fur coat.  The frost is thick enough to take impressions and the imprint of the ponies' hooves is everywhere, as are the slots of deer, or possibly sheep.  The small flock of black woolly sheep is rooting around by the stream, pausing to regard me with vague alarm, as do the various pheasants wandering around, very obvious with little or no undergrowth to give them cover.  That must give the foxes a head start. 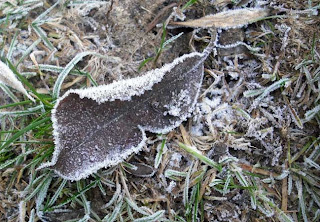 Annoyingly, it's clouding up now, and the sun is obviously not going to make an appearance after all.  Oh well.  Time to head for home before my fingers and toes get frostbite.  As I walk back up the road from the farm, snowdrops are visible in small clumps on the verge.  A bit early, perhaps, but seasonable.  The daffodil clumps are also shooting up fast, and one of them even has an early bud, presumably a product of all the mild weather we had over Christmas.  So far, it looks like an early spring is on the cards, but who knows?  Personally, I'd like a bit more frost and cold, clear weather, maybe even a little snow, to make a proper winter before we get spring.  But nature has no sense of tradition, so I wouldn't count on it.