Two and a bit weeks to Christmas, and in the midst of days of rain, sleet and even the occasional snow flurry, we have a morning of bright blue skies, fluffy clouds and sunny intervals.  Oh, and a side helping of icy wind, but you can't have everything at this time of year.  I'm catching up on a bit of brook that got missed out earlier on, due to inefficient scheduling.  I'm in the garden of Upper Vatch Mill, courtesy of the owners, walking their section of the brook, which lies between the Painswick Slad Farm field and the garden of Vatch House.

From the field side, I was able look down and see (and hear) the weir which tumbles the brook into a culvert through this garden – now I’ve come to look at it from in front.  The first, and unexpected, thing I discover is that Upper Vatch Mill has a bit of secret stream. I hadn’t realised, looking at it from the field, that their garden includes a short section of the brook before it falls over the weir.  I’ve rather over-used the word ‘secret’ in relation to the Slad Brook, because of the way it is largely shrouded in trees, but this little bit really does feel secret because it's fenced off on three sides as well.

As so often by this stream,  I'm standing in the deep green shade of trees looking out at sunny fields, like a traveller at dusk looking at lighted windows.  Specifically, I'm looking back into the Painswick Slad Farm field, where the bullocks are looking back at me in some surprise.  But also, from the bit of bank I'm standing on, I can, most unusually, look straight up the middle of the stream.  The reason for this is that the stream does an odd wiggle here so that this section of bank is projecting into the main flow like an elbow. By standing on the point of the elbow, I can look back up a long, straight section flanked on both sides by tall trees.  The trees have all lost their leaves and look even more than usually architectural as a result.  It’s like looking up a watery corridor in some sort of palace with fan vaulting designed by an architect with a hangover.  Out comes the camera, but as usual I struggle to capture this cathedral-like quality.  It’s another area where the camera falls short compared with the eye.  By flicking my eyes up and down, I can see at almost the same moment the whole corridor of trees from the spreading filigree of branches overhead to the point where the roots reach into the stream.  The camera can’t, even on widest angle.  Why not draw it, I hear you say?  Do you know what the temperature is out here today?  Not much above freezing, and that's before the wind chill factor.  My hands are already frozen from taking my gloves off to operate the camera.  Instead, I try taking a short movie, panning up and down, which might give a better idea of it.  Judge for yourself how well I succeeded (not very!).

This 'secret stream' is also unusual because while on the opposite side of the brook the banks slope down to the water in the normal way, on this side there is 10-15 feet of flat land beside the brook, and then a bank which slopes up into the field beyond.  For some reason the trees have chosen to grow on the bank, not by the stream in the usual way, so this little bit of flat land, covered in dead leaves, nettles and fallen wood, is like a tiny bit of no-man’s-land, neither brook nor field.  It's like a long narrow tray with a lip round the edge.  It's only after I've been walking up and down it for a while that the obvious conclusion occurs to me - this was probably once a section of a man-made channel, designed to be much wider than the stream itself, and part of the mill system.

There were indeed once mill buildings in the grounds of Upper Vatch Mill, though according to the owners the house itself was never part of the mill.  The mill buildings were somewhere in the garden, nearer to the weir – which makes sense.  Evidently it was all part of the Vatch Mills complex which included Vatch House and its leat. 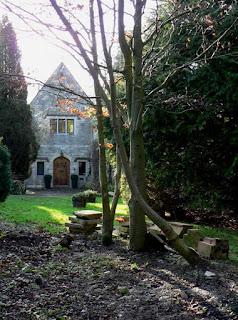 We've had a lot of rain in the last week and the stream is fuller than it was, and fast-flowing here.  Walking back down the 'secret stream' towards the house, I can hear the weir well before it comes into view.  It's good to be able to get close up to the stream - in the last few walks, it's been mostly fenced off - but it means clambering over a lot of dead wood, such as this hazel whose main trunk has completely collapsed. But it's still alive - a mass of slender new stems have sprung up from the roots, young turks taking advantage of the fall of the grand old man to make a bid for their place in the sun.  The main trunk is covered in rampant ivy.  Almost the only green around here comes from the jackets of ivy leaves on the trees, and the occasional fern, but even then it's an apologetic, knocked-back green.  Otherwise I'm surrounded by browns, buffs and greeny-browns.  No strong colour anywhere except in the (temporary) blue of the sky.  The winter sun is so low that its light bounces blindingly off the water straight into my eyes, turning the house to a Gothic silhouette.   The drama of winter light - I love it. The camera doesn't, apparently, since it keeps trying to compensate for the massive backlighting with flash.

Here is an intriguingly revolting sort of fungus growing on the side of a fallen tree, and it's a new one on me – like brown jelly with a bit of pale jelly on top, which I suppose is a new growth.  I've seen a lot of interesting fungi this autumn and I meant to find out more about them, but when I happened across a reference book on fungi it was so huge, and so complicated, that flicking through its pages I rapidly lost the will to live.

By the weir the stream turns sharply to the right and goes through what would once have been sluice gates.  Sections of wall remain on either side with a large tree growing out of one end of the wall.  The gates themselves are mostly gone but on one side the gatepost remains and you can see the channel cut in the stone where the gate would have run.  On the other side, the stone has fallen over, partly blocking the gap, and the whole thing is covered in swathes of ivy.  Nevertheless, the stream is finding its way through; water can always find a way.  I catch glimpses of small birds nipping in and out of the ivy and dodging under the undercuts in the stone and guess that it must be a pair of wrens.  I'm proved right when one of them appears right in front of me, shouting abuse. Size is no guide to chutzpah in birds - I'm always amazed by the boldness of wrens compared with the relative wimpishness of magpies.  I watched a magpie being seen off by a wagtail once, but that's by the by.

Beyond the sluice gates the water rushes through the gap, down the stone steps of the weir, and vanishes into the arched entrance of a stone culvert.  Above the culvert is an old terrace fenced with decorative stonework which is also somewhat battered and broken, and what with that, and the ivy, and the fallen blocks by the sluice gate, the area has the feel of the ruins of some sort of temple.

In my mind I try to reconstruct what all this might have looked like when it was a working mill.  It's hard to see exactly how the water was supposed to run.  There are three streams of water coming over the weir, only one of which comes through the main gap where the sluice would have been.  The other two come from a sort of tunnel on the further side of the weir and what looks like a deliberate gap in the wall beside the sluice.  On the far left of weir is what was obviously another run-off channel, with more moss-covered stonework at the top of it, so presumably some of the water could have been diverted down it.  From this angle, by the weir, I can see a sharp little bank at right angles to the sluice which could well have been the edge of a mill pond, if that's what that flat area by the stream was.  But if so, shouldn't the sluice gates have been higher up rather than at the level of the current stream?  I give up my speculation and concentrate on recording the sounds of the weir and of the stream running into the culvert with a satisfyingly hollow glopping.

Following the underground line of the culvert, I walk past the house and across the bottom of the garden to where the water reappears through another stone arch.  It pools in an impromptu pond in front of the arch before rushing over a lip and down into the garden of Vatch House, making a good deal of noise about it.  Standing on the boundary between the two gardens, I can see why.  The cause is the Great Flood of 2007.  Originally there was a wall – it's now hard to see where it ran - which was completely demolished by the flood water and its debris still lies in the stream, forcing the water into rapids and rivulets.  Looks like the flood also carried part of a fence away at the same time because there are bits of wire and whatnot all over the shop.

Here's an interesting thing.  When I was walking this end of the Vatch House garden a couple of weeks ago, I photographed some tiny toadstools growing on a tree.  I can see them now - grown to four or five times their original size in a mere fortnight.

The owner of Upper Vatch Mill was talking about wanting to restore the sluice gates and the stonework if he ever had the money to do it, and that would be really interesting to see, but I’ve been very glad to see the stream and the remnants of the mill  as they are now, on this cold, bright winter morning, just as time has left them.  All low light, long shadows and gentle decay.

The sun is still out, so on my way home I detour up Swift’s Hill to get the last of it.  Over the apex of the hill, one of the local kestrels is being mobbed by a couple of rooks.  Much higher up, a buzzard floats undisturbed, sunning his wings.  On the way back, I spot a single spray of white flowers growing out of the hedge in the lane, and a rosebush in the garden of Knapp House is sporting two perfect red rosebuds.  Small intimations of spring in the depths of winter.  Odd,  but cheerful.