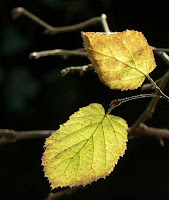 It's a cold Wednesday morning, but sunny - and this time of year one grabs sunshine whenever it shows up.  So I'm going out to walk the next section of the brook after Stroud Slad farm.  From here on, it looks like it's going to be lots of short walks, because as it gets closer to Stroud, ownership of the land the brook runs through gets more and more piecemeal and co-ordinating permissions gets more complicated.  Today, it's a single field's width belonging to Wade's Farm.

We are very much into winter now.  There has been frost this week, though not today, and the trees are almost bare, though some are still hanging onto their leaves in the face of the weather.

My walk begins along the main road in order to get access to the field in question.  Not so much fun, because of the traffic, but it has its compensations because of the views across the valley.  I don't actually walk along this part of the road much - I'm normally whizzing down to Stroud in the car, and though you can see the views from the car, you don't really get a sense of the size and 'presence' of the valley.  It's good to have a reason to walk this section and appreciate it.  The valley is now getting more concentrated, as it were.  As it gets narrower and steeper, the woods and fields and the road and the brook are all squeezed closer together like toothpaste forced out of a tube. (Stroud as the exit point of a toothpaste tube.  Is that a happy mental picture?)   The fields are increasingly lumpy and bumpy, and flat land is in ever shorter supply.  I can see most of the route I walked through Stroud Slad Farm's fields a few weeks ago - interesting to follow it from above.  A few trees still have leaves, in particular the oak trees which appear occasionally in Stroud Slad's hedgelines.  Today these few oaks are glowing in the winter sun, unexpected beacons of colour amidst the mass of grey, skeletal trees about them.

I enter the field close to a significant hairpin bend in the road.  It slopes steeply and is currently well soaked and squidgy with recent rain.  There is the occasional flower - small dandelion-relatives - still hiding in the grass, which says something about how warm this autumn has been, I guess.  As I squelch my way down to the stream, I disturb a deer lurking in the trees by the water and a squirrel or two.  The stream runs along the bottom in quite a steep little cleft.  The owner of the field reckons that it's only half as full as it used to be in earlier years.  He says he used to see water voles and other wildlife down here which he thinks have now disappeared because the water level has fallen.  Higher up the valley, some parts of the stream run in a much flatter bed and give the impression that it couldn't hold much more water than currently, but just here, it's obvious from the shape of the banks that it could be a lot deeper, and has been in the past.

There's the inevitable barbed-wire fence along the stream and I spend a little time looking for a way through it.  There is a dip in the wire and a corresponding dip in the ground scraped by animals pushing their way under the fence but it's not a big enough dip for this animal to follow so I have to stay on this side of it.

Half way along the field and by the stream is an old stone building -  a barn, I think, though round here there's always the possibility that it's a bit of ex-mill.  It does have some curious winding gear sticking out of one side of it and there is old machinery lost in a clump of brambles behind it.  On the other side of the barn the fence has moved and it's possible to get down to the stream.  The opposite bank is steep, sandy and sharply cut-in, like a miniature cliff.  Most of the stream doesn't really have the kind of bank you can imagine water voles living in, but just here it does seem possible.  And indeed, there is a small hole down by the water, though I very much doubt it belongs to a water vole.  No 'lawn', for a start.  What else makes holes by the stream?  Rats?  Kingfishers?  My list of UQs (Unanswered Questions) grows longer.

Growing right into the middle of the stream at this point is a massive multi-stemmed hazel clump, elbowing everything else out of its way, including the fence.  One of its trunks has managed to grow through and round a fork in one of the other trunks, creating a curious lovers' knot in the middle of the tree.  The shapes of trees feature heavily in memories of the stream so far - mine and the camera's - so I have a feeling they are going to find their way into my work.  As will the ivy that so often covers them.  There's a splendid specimen here, clothing the tortuous trunks of a willow like a coat of chain-mail.  Up to this point, the stream has been flowing quite quietly with little interest for my sound recorder, but the obstruction of the hazel's roots and their load of trapped debris creates some good trickling noises.

From here on, trees grow only on one side of the stream, allowing more greenery to spring up on this side, including something which looks a lot like watercress but probably isn't, and the occasional clump of irises.  The stream is bridged by a fallen branch from a willow which is so straight that at first glimpse I assume it's a pipe of some sort.  The illusion is helped by the hollow noise the stream makes running over and under it.  Noises are actually in rather short supply this morning - pausing to take in the general atmosphere of this field, it seems to me that 'quiet' about sums it up.  Not much noise, not much activity, unless you count the traffic.  I've heard very few birds and seen very few insects.  No spiders, slugs, snails or anything.  Even the squirrels seem to have gone to ground.  Winter dormancy reigns - even the plants by the stream give the impression of having battened down the hatches until spring.

The end of the field is marked by a very definite red brick edifice, the wall of someone's garden.  Beyond here, the stream is flanked on this side by houses - the first tendrils of Stroud reaching up into the valley.  The wall looks old and extremely solid, topped by a massive ruff of ivy (well, better than barbed wire) but down at its base is a small hole.  I like the thought of some little animal industriously setting out to undermine this great barrier for its own purposes.  There's been evidence all up and down the stream of how unimpressed the rest of the mammal kingdom is by our human boundaries.  They just patiently set about finding a way over, under or through them. 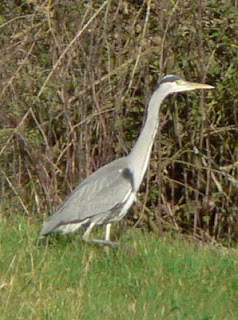 I start to make my way back along the field to the barn and I'm pausing to contemplate the view back up the field and around the curve of the road - another perspective on the valley that I've never seen before - when a movement catches my eye.  It's a grey heron landing in the field with a flurry of big wings.  He then proceeds to stalk slowly towards the stream with a stiff, old-gentleman gait, pausing every few steps with head and neck thrust forward, the better to watch and listen.  So intent is he on the stream that he doesn't notice me and continues his stately stalk for some minutes before disappearing into the undergrowth.

Elated by my heron encounter, I get brave enough to shimmy under the barbed wire for a closer look at the stream in the earlier part of the field.  Down here, throwing up multiple stems seems to be the order of the day for trees - they are all at it, even the hawthorns.   I remind myself to look up - it's so easy to go around seeing only the bottom halves of trees, failing to appreciate their full height and the complexity of the canopy - and am rewarded by a spark of brilliant colour as a jay flashes away from a branch above me.

I'm glad I persisted with the fence, because from this side of it, I can now see that there's a small tributary stream running into the brook.  From the other side, it was very thoroughly hidden by a group of sagging and half-collapsed willows, their limbs gnarled and rheumaticky-looking.  They have no leaves, but I'm pretty confident that they are willows because of their fantastically heavy-duty bark, like flock wallpaper writ large.  This small stream winds down the field crossing and re-crossing the field boundary with blithe disregard for human fences.  I trace it back to a tiny trickle of water not far below the road.  By now the afternoon is getting short on light and warmth, so I decide to call it a day and go home for tea.