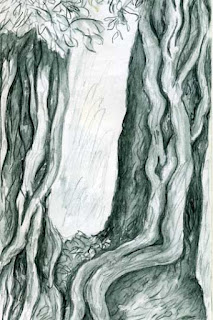 A warm and sunny afternoon in early June.  After the last walk, I have a strong feeling that perhaps I'm doing too much walking and not enough sitting still, too much looking at everything through the eye of the camera instead of my own eyes.  So today I've come back to the Snow's Farm Reserve with only my sketchbook and drawing kit and (of course) the sound recorder.  I start by drawing the ivy-wrapped trees I noticed last time not far from the Reserve entrance.  All goes well until I hear heavy footsteps behind me and realise that I have an audience.

The resident group of ponies were on the far side of the stream when I was last here, but this afternoon they are on this side, and evidently bored.  Feeling that I offer possibilities for entertainment, they have crept up on me, and having got my attention, they proceed to do everything possible to keep it, beginning with huffing on the back of my neck and working up to making a grab for my sketchbook and lipping the end of my pencil. When I remonstrate with the would-be pencil-biter he shows his teeth in what may or may not be an ingratiating grin. I retaliate by trying to record their heavy breathing, and the microphone gives them pause for thought.  Feeling that this should perhaps be the end of this particular sketch, I get up to move away, and as I do, I spot movement further up the valley.  Orange specks bouncing about on the sunlit grass.  Fox cubs, I think, and curse myself for not bringing my binoculars.  This was supposed to be purely a sketching trip, you see, and other sources of visual temptation, such as cameras and binoculars, have been left behind.  Damn. 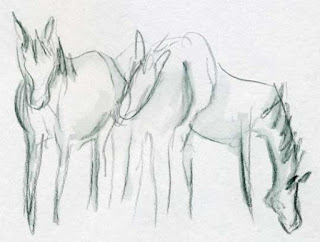 I decide that in the circumstances, I've nothing to lose by simply trying to get closer.  So I start to walk slowly up the valley towards the distant foxes. The ponies follow, still clustering about me hopefully.  At first I am annoyed, assuming that this lumbering group will cause the foxes to flee, but it soon becomes clear that the cubs aren't bothered by the sight of a bunch of ponies.  I wonder whether that's because they are just used to seeing the ponies about and haven't spotted me amongst them, or whether it's sheer lack of experience of ponies and humans as sources of danger.  Either way, I succeed in getting within about 20 yards of where I last saw them.  At first, I think they've gone, but then one small cub trots out of the undergrowth almost next to me, and I realise that the others are lying down under a nearby tree.  Slowly and cautiously, I move into a patch of shade and sit down, and the ponies wander off a little way, seeking their own shade.

It's a group of 5 cubs, of varying sizes, so I suppose different ages and different parents.  No sign of an adult fox, so this lot are evidently home alone.  They play under the tree, smaller cubs bouncing on the older ones just like small children and occasionally provoking a yarring protest.  Sometimes they venture out into the open and wander about a bit before returning to the group.  I dare not open my bag and fish for my large sketchbook for fear of making a noise and scaring them off, but I do manage to get a hand to the tiny sketchbook and pen I always carry in a pocket, and I sit making scribbly drawings of them. 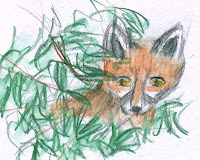 Presently one cub, braver or just more curious than the rest, spots me and decides to take a closer look.  He begins to stalk me, edging closer under cover of the undergrowth, popping up to peer at me, round-eyed, from behind a bush.  I try not to look directly at him, and concentrate on trying to make my presence as small and unthreatening as possible.  He gets quite close before running out of courage or interest and trotting back to the group.

I stay with the cubs for over an hour.  An extraordinary experience - it feels as though they, and I, and the horses, are all part of the landscape, everybody relaxing in this beautiful hot afternoon. Eventually, I can't resist the temptation to try and record the little nattering barks they are making to each other.  With infinite care, I extract the sound recorder from my pocket and slowly edge closer to them.  To my astonishment, they ignore me and carry on playing.  At this point the ponies wander back on to the scene, perhaps attracted by my movement.  Some of them come to investigate me, and some amble towards the cubs.  In the end, they get a little too close to everyone for comfort.  The foxes retreat further into the trees and out of sight, and I decide that it might be safer not to be at the level of a pony's heels, so I get up return the way I came, marvelling.

From the other side of the stile, a field's length away, I pause and look back.  I can still see the ponies, and after a moment or two, a cub reappears, trotting onto the grass, then running back to the trees.  So my leaving doesn't appear to have spooked them any more than my arrival did.  I feel immensely privileged, though when you think about it, in the world of a fox cub, I'm just another large animal, like the ponies, of which they (so far) know no ill.  If only it could stay like that.

Somehow I feel it might be significant that I didn't have the camera with me today, as if because I came intending to look properly, and not through a lens, I was granted sight of something special.  There's no logic to that thought, of course, but it stays in my mind.

Back on the road, I can hear the cheerful human sounds of people relaxing in their gardens.  And I think to myself that less than half a mile away are foxes doing pretty much the same thing - neither group aware of the other.
Posted by Amanda at 18:00