Walk 7 - A good place for kingfishers: from Steanbridge Mill to the village pond

A breezy afternoon, with rain forecast for later.  The hot dry spell of early spring is only a distant memory now.  I'm under the impression that this is going to be short walk.  It is short in distance, being about 100 yards of the Dillay that runs through the garden of Steanbridge Mill and along Steanbridge Lane but significant because it includes the point where the Dillay meets the Slad brook.

The owners of Steanbridge Mill, Dr and Mrs Fairgrieve, have not only agreed to let me walk through their garden, but Mrs Fairgrieve is to give me a guided tour of their section of the stream.  The first thing she does is to point out, from the vantage point of their back fence, a large flattened sunken area between big banks in the field behind.  This used to be the holding pond for the mill, apparently, and still fills up with water during wet winters. I missed it entirely when I was walking in that field, partly because was distracted by the attentions of the horses and partly because I didn't know I should be looking for it.  Now that it's pointed out to me, the feature is very obvious, and I probably ought to have spotted it because we have something similar behind own cottage, which served the old Vatch Mill.  There were many mills in this valley in the past, of course, making use of the two streams, but so far their traces, if any, haven't been obvious to me on the ground.  The garden of Steanbridge Mill is the far side of one of the banks that encloses the old pond and Mrs Fairgrieve admits to some nervousness about the bank eventually giving way. 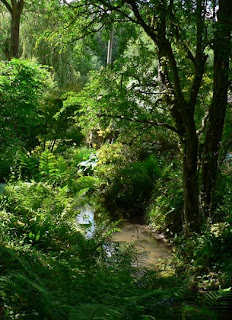 We follow the stream down through the upper part of the garden, where its banks are thickly grown with trees and plants, some woodland invaders, some more exotic garden plants, which gives this section an almost tropical feel as the sunshine filters down through leaves, lighting up the water.  The stream emerges alongside an open lawn and runs down through the vegetable plot.  I'm shown the point where the Dillay and Slad brooks join, via a culvert under the lane, and it's a bit of an anti-climax, really, the Dillay seeping into the Slad brook through a narrow opening without fanfare or fuss.   The stream, now officially the Slad brook, runs on out of the garden and under a narrow lane which runs up the hill towards Catswood. 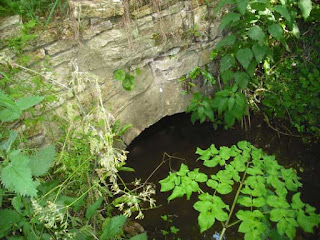 The lane is carried on what Mrs Fairgrieve says is a 13th century bridge.  It's not so easy to see just now, because of the summer growth around it, but I catch a glimpse of a stone arch, low to the water, and several layers of stone above.  In shape, it's not unlike the 'Roman' bridge.  Just beyond the bridge, Mrs Fairgrieve points out where there used to be an old sheep dip, which would be formed by pushing a big stone across the stream to make the water level rise, then the sheep driven through it.  Apparently in winter you can see the slots which the stone would have gone into, so I must come back and take a look when it's all less overgrown.  Mrs Fairgrieve was shown this feature by Laurie Lee, who of course remembered seeing it in use.  It's clear that at this point the stream was once walled in stone, and a small rivulet that runs down the track from the hill above runs into the stream over an area of exposed wall, making a pleasantly trickly, recordable noise.

The main stream now runs through a narrow ribbon of woodland which the Fairgrieves own, flanked by farmland on one side and Steanbridge Lane on the other.  We follow a path through the wood to reach the small lake at the far end which all Slad thinks of as the village pond.  Here, after proudly pointing out a clutch of teenage mallard ducklings which she has been keeping an eye on, and a fox in the field opposite which she accuses of taking one of them, Mrs Fairgrieve leaves me to my own devices.   I'm already delighted by this little section of stream and woodland so I retrace my steps, more slowly, to get to know it better.

I can see quite a change in the stream here.  It's no wider, I think, than it was when it was flowing through the Down Farm fields, but it does seem deeper, clearer and faster-flowing.    I think this is the first section of stream since the upper Dillay valley where it's been easy to approach the stream closely and walk along its banks.  This is partly because this area is flattish and partly because the Fairgrieves have kept it generally free of fallen wood and the worst of the undergrowth.  Pausing on a projecting mudbank to peer into the water, I'm astonished to spot something alive and moving.  Closer inspection reveals it to be a lamprey.  Now see how serendipity works - I wouldn't have the first clue what a lamprey looked like if I hadn't happened to watch an episode of 'Halcyon River Diaries' the other day which featured close-ups of young lampreys.  This one has attached himself to a stone.  Rather unkindly, I use a stalk to detach him gently from his stone, in order to see him better.  He wiggles energetically, swimming determinedly against the current to re-attach himself to his chosen stone.  I'm enchanted.  This is first living beast I've seen actually in the stream.  Mrs Fairgrieve tells me there is plenty of life in this section though, not only lampreys but small crayfish, brown trout and minnows.  I can't help wondering if this is so in the whole length of the stream, or if this bit is specially favoured because it is kept clear and there's more light because less undergrowth.  As if to prove the point, a little further along the stream I spot a minute fish (minnow?) darting to and fro. 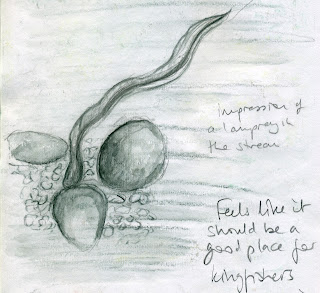 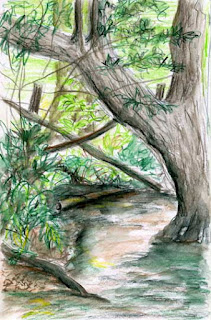 After trying to take pictures and videos of the lamprey (with indifferent success) and making a quick sketch, I leave him to his stone and settle down against a tree to do some drawing of the area itself.  The word 'secret' has kept coming into my head to describe this stream, and on the last walk I found myself talking about children's dens and that sense of being pleasurably hidden from the outside world.  It's even more so here, because the fields and the road are very close by, and there's a fair amount of traffic, but the road is hidden from me by a steep bank, and I can catch only glimpses of the fields through the trees, so that I have a sense of being in my own little bubble of watery beauty while the rest of the world passes close by, but unaware.

The trees here are tall and wrapped in trails of ivy.  There is meadowsweet growing in the stream, the banks of which are slightly undercut and look as though something should definitely be living in them.  There is a strong smell of wild garlic.  Once again the mental stillness induced by drawing works its magic on the local wildlife.  A wren perches quite close by; a mallard with seven very small ducklings passes me, unconcerned by my presence, the ducklings being pushed all over the stream by the strong current.  For some reason I feel convinced that this particular spot should be a good place for kingfishers.  Cue for an electric blue flash?  Alas, no, though according to Mrs Fairgrieve they have been seen on occasion.

Walking back up the stream towards the pond, I find several interesting holes in banks and ground.  Holes fascinate me nearly as much as animal footprints.  I feel I should be able to tell who dug them, and why.  I always hope they are signs of small mammals (or even large ones) and not merely dog-scrapes.   These are smallish and might belong to voles or similar.  Or not. 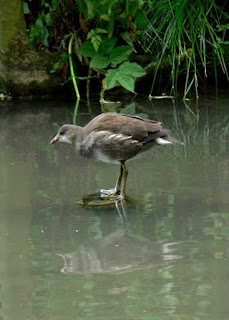 The pond is a genuine duckpond and I've been here when there have been 50 or more ducks on it, but today it's less busy.  The teenage mallard ducklings have moved off, but I can hear a young moorhen peeting softly from her perch on a stick in the middle of the pond.  The pond is looking very lovely in the sunshine, with trees trailing swathes of leaf into the water and its edges bright with blue comfrey and bluer irises and laced with cow parsley.  At the further end, where the stream leaves it, is a sluice which Mrs Fairgrieve says takes some keeping clear of debris.  The stream runs under the footpath, via another little arched bridge which isn't visible except from stream level.  It doesn't look nearly as old as the 13th century one but it's nicely shaped.  It also marks the end of today's walk, because beyond here the stream runs into the land belonging to Steanbridge House.  Looking at my watch, I see with astonishment that this supposedly short walk has taken me a good three hours.  Which just goes to show that, like all really pleasurable activities, walking the Slad brook expands to fill the time available.  The more you look, the more there is to see.

Google map of this walk
Posted by Amanda at 18:00