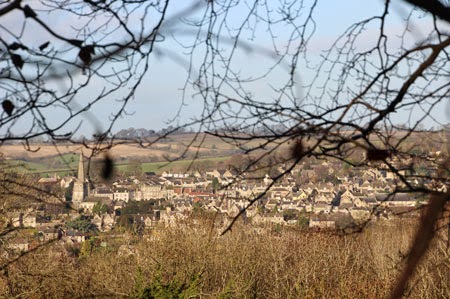 Today I'm resuming my valley walks after quite a gap.  I've been away, and the weather has been diabolical, with continuous rain and flooding all over the county including our lane, reminding me (for the third time in five years) that our little stream is not always the tame beast it seems to be.

Frith Wood, aka Morley-Penistan Nature Reserve, really deserves longer than that.  It's both a wood and an edge, being right on the ridge of the hill between the Slad and Painswick valleys and spilling down the slope on the Slad side.  At the entrance to the wood it really does feel like an edge, because through the network of branches you can see right down into Painswick village on one side and into the upper end of our valley on the other.  It has for a long time been one of my favourite views of Painswick and its church. 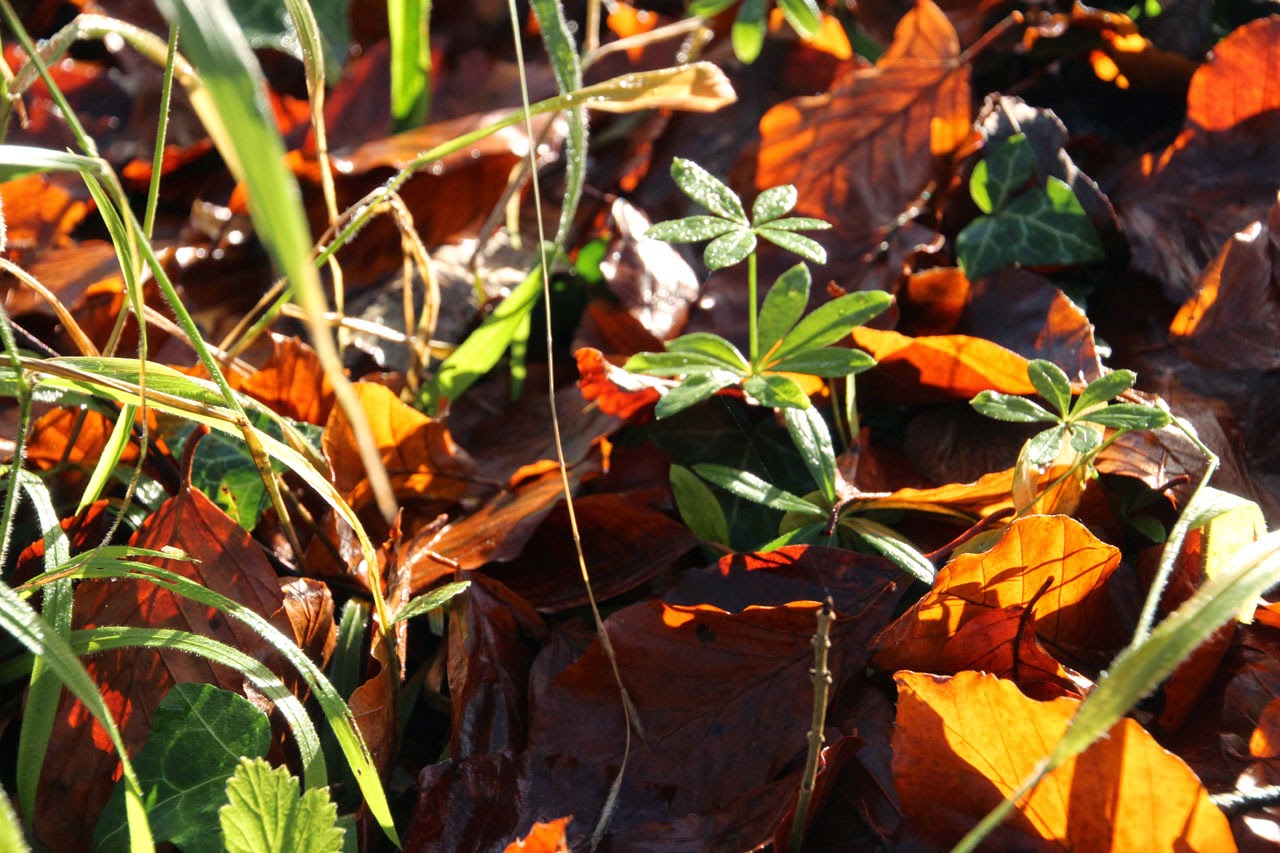 The approach to the woods is lovely; the ground is a brown-bronze carpet of wet beech leaves, and where the leaves are scuffed up, a very low sun shining through them turns their edges to glints of translucent gold.  I'm walking almost straight into the sun and half-blinded, which gives everything a mysterious, hyper-real feeling, including a tall stone, splendidly craggy with moss and lichen-covered, illuminated by a single shaft of sunlight.  If looks were all, it could be an ancient standing stone, but it isn't, of course.  Closer examination reveals it's probably an old gatepost.

Decision time - I'm now at the point where two main paths separate.  Frith wood is curiously shaped like a pair of trousers with a gap in the middle and one leg shorter than the other.  And like the famous Trousers of Time, once you've committed yourself to one trouser leg, you can't get across to the other one.  I decide to stay at the top of the ridge on what, according to the reserve leaflet, used to be the old drover's road, because that seems more 'edgy'.  As in 'along the edge', let me point out, not as in 'exciting' - I'm not expecting excitement this morning.

What with the weather and being away for a fortnight, I seem to have missed out on my dose of autumn colour this year.  I was hoping to catch the last of it today, but almost all the leaves have gone in the rains.  Still, there are marvellous things about the period after the leaves too.  It makes the few remaining leaves more vivid, and with the sun behind them, as now, you get the stark shapes of the trees, the whole structural sense of the wood. As I've said before, it's like the pillars of a cathedral or (I've just come back from Egypt) the columns in a great temple.  Your eyes are dragged inexorably upwards.  Not that I can see any trees with the circumference of the pillars at Karnak... This is supposed to be ancient woodland, which is why it's reserve, but like so much of the valley, most of the trees around here are quite small, with just a few large ones here and there.

Here's the thing about Frith Wood.  Every time I come here, I get slightly lost.  I don't know what it is about these paths, but they lead you astray.  I am no longer on the drover's road, and I'm not sure how it happened.  I rather think I'm on the next path down the hill, but I'll find out eventually.  Coming to another fork in the path I choose the right hand one for no better reason than that there's more sunshine in that direction.  It's very quiet and still.  A buzzard flaps heavily away from me from one of the trees ahead.  The occasional leaf flutters down.  Everything is wet and gleaming with networks of fine drops on strands of spiders web.  There's that lovely feeling you get after the rain finally stops and everything takes a deep breath.  The paths are ankle deep in mud but that's pretty normal, this being one of the more popular areas in the valley for walkers, especially dog walkers, and riders.  Can't you just tell that it's been a very wet year - late in the season though it is, everything is green and damp and covered in moss.

Sunlight edges the leaves and branches in a way which always makes me want to reach for the camera - the results are rarely what I hoped for but hope springs eternal.  It's so fascinating what light does.  As I walk along with the sun still almost head-on, flickering through the endless small trees on my left, I feel as though I'm inside a zoetrope (which is a thing the Victorians had, a sort of drum with slots in it and a series of images inside; rotate the drum and look through the slots and you get a flickering sense of movement, like a very old and battered film).  At another choice of paths I keep going uphill, hoping to rejoin the drover's road at some point.

I came here with Gloucestershire Wildlife Trust earlier in the year on a volunteer day hunting for wintergreen, a plant which according to the Nature Reserve leaflet is supposed to live here but hasn't been seen for some years.  We didn't see it, either, so the leaflet will have to be revised.  The theory is that the deer may have eaten it to extinction, but who knows?  It was a privilege to wander around with experts, though, and be shown tiny spiders on the trunks of the trees, and unexpected fungi.  I am reminded of this now, spotting tiny white fungi on one of the trees, which I haven't seen before.  Not that that's anything to get excited about - the list of fungi I haven't seen before would fill a field or two.  Still, it's good to be reminded to change perspective, to look up close, and to look up high, rather than sticking at my normal human five foot up and ten yards ahead sort of vision.

I've come to the gusset of the trousers now, where the two legs are separated by a field, and follow the upper, and shorter leg.  The other thing I learned from GWT was that Frith Wood suffered badly in the hurricane winds of 1987, which is one reason why there are so few big trees in the wood.  That's particularly obvious here, where the wood slopes steeply away from me down towards Painswick.  The path dips downwards, becoming a mere shelf in the hill, and there are great humps and bumps all over the place which, on closer inspection, could well be the remains of the rootballs of big fallen trees. These are old, but here's a big fallen tree, still intact, which looks as though it came down more recently.  Not last night, though, despite us having exciting winds, possibly the tail end of Hurricane Sandy, because it's covered in a drift of beech leaves.


Apart from that, the leaflet doesn't have much to say about this leg of the trousers, as though not much goes on here, and it does have a slightly abandoned air. But I bet it's full of non-human activity - looks like it could be a good corridor for animals, and just as I'm thinking this, here's a big hole underneath one of the ex-tree-humps which looks large enough for rabbits or even foxes.  I like the thought that areas we can't find much to say about because humans touch them only lightly are likely to be buzzing with other life.
The path is rapidly dwindling in size and confidence and I suspect I'm coming to the end of the reserve.  Suddenly the way is half barred by holly bushes and undergrowth; the path seems to continue, which suggests it's an animal path at this point, so I push through, and come upon a stand of very big and singularly impressive beech trees, which makes me glad I braved the holly prickles.  Imagine the whole wood being full of such trees.  They cling to the edge of hill, as do I, the path having lost even its shelf now.  Not having massive roots, I go more carefully from now on, slipping in drifts of beech leaves.  A remnant of iron fence on the ground suggests a possible boundary, so I turn parallel with it and make my way downhill.  Suddenly I find myself on a real edge, the edge of a huge bowl-shaped quarry, long abandoned and overgrown, but still essentially a great big hole in the landscape.  The bit I'm standing on is quite scarily undercut and there are trees growing right on the edge, roots clinging on for dear life.  Lots of ferns are growing in the bowl, but I'm really not going close to the edge to look over.  I had no idea this was here, and wonder if I'm still in the reserve, though there's been no obvious boundary.

My particular trouser of time is more of a pair of shorts this morning so I have to retrace my steps now, and save the other trouser for another dry day (assuming there is one, which seems doubtful at the moment).  Still, it's been good to get out, and to wander in a part of the wood which doesn't feel as though it has that many human visitors.  The sun is now behind me and lighting up the path ahead of me, catching the edges of turned-up beech leaves, so that they glow like the lights on the floor of a plane, guiding my feet to the exit.  And here is a lone beech sapling with lots of leaves still clinging to its branches and the sun shining through them - my own small fix of late autumn colour. 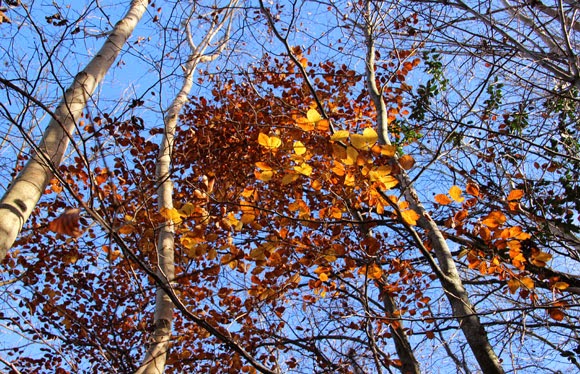