Walk 2 - Life and death in the Dillay valley: Dillay Farm

Since my first walk to the rising of the Dillay Brook, I've been working on getting the permissions needed to enable me to walk the whole length of both Dillay and Slad brooks, since few of the footpaths in the Slad Valley follow the streams.  This has involved a certain amount of detective work, but with the help and good offices of friends in the village, I'm getting there.  I've been much encouraged by the responses I've received so far from local landowners - ranging from enthusiastic, to puzzled-but-positive.

Today's walk, down the upper part of the Dillay Brook, is courtesy of the owners of Dillay Farm, Mr and Mrs Barrington, who generously agreed to me walking their section of the brook but warned me that the lower part of the stream would become 'a bit intrepid' as the nettle season advanced. So it's a good thing I'm getting this walk in now, in the third week of April, and on a brilliantly sunny and almost summery afternoon.

I start from Dillay Farm.  Up at this end, the valley is narrow and steep-sided, as witness the gradient on the approach to the farm, which causes my car to make a reproachful comment about its lack of four-wheel drive.  From the farm, I walk back up the track towards the head of the valley so that I can start from where I left off a couple of weeks ago, by the spring under its hawthorn canopy.

Last time there was only me and a loudly-singing bird at the spring.  Today a group of cows and young calves are making the most of the shade.  As I approach, they turn as one cow and look at me with expressions that suggest I'm seriously interrupting something.  One matronly beast cautiously approaches to give me the once-over; I imagine she's checking that I'm no threat to the calves. She comes close enough for me to record her huffing breaths on the dictaphone (must be careful to establish context for this recording, otherwise it could be mistaken for a heavy-breathing phone call), then she retreats, apparently satisfied. There's something very appealing about this peaceful scene, cows and calves reclining under the trees, so I halt at what I hope is a non-threatening distance and make some scribbly drawings in my sketchbook.  What a nice place for a calf to grow up in, I think, no traffic, few walkers, hardly any disturbances. 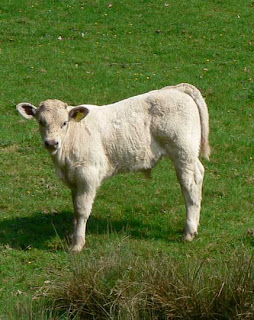 Before setting off down the stream, I also record an explosion of song from what I would like to think is the same bird in the hawthorn trees.

Up here the Dillay Valley feels very secret, very isolated.  On this sunny spring day, it's also very lovely. The stream is a narrow silver line wandering between banks of bright green boggy grass studded with dark clumps of rushes.  A tiny tributary joining it from the west side provides my first good recording of water noise.  The main stream gathers sound and size and ducks in under a roof of hazel trees, their multiple trunks making striking shapes against the bright sunlight.

Around the corner is a side valley which runs up to Nottingham Scrubs. The map shows a stream running down this valley to join the main stream.  On the ground, you can see the line of the stream as a sort of indentation, but at this end it's rather more bog than stream, punctuated by marsh marigolds and the odd lady's smock. I detour into the side valley because it looks even more idyllic than the main one. Sheep are grazing its grassy lower slopes; at sight of me, a ewe calls her straying twin lambs and they dash back to her, butting her udders from both sides at once, tails wriggling frantically. Cue for more scribbly drawings.  Then, on my way back to the main stream, a shocking sight.  Lying in my path is what looks like the back leg of a lamb, surrounded by pathetic wisps of fleece.  I wonder what predator would take a lamb - fox maybe?  I remember my thought about the valley being a nice place for calves to grow up in and realise I've been guilty of gross humano-centrism.  It might look peaceful to me, but for the animals it can just as easily be a place of fear and violent death.

Beyond here, the stream briefly divides around a big patch of bog.  The valley is mainly close-nibbled grassland here, sloping up to the farmhouse, but a few big old trees grow by the stream, one of them thickly covered in ivy growing in a perfect herring-bone pattern.  Next to it is another big tree which has completely fallen over, roots in the air, but nevertheless has fresh green leaves and blossom.  How tenacious plants are.  (Except, apparently, when I plant them.)

It bothers me that I can't be sure what type of tree this is.  My knowledge of trees is basic - this looks like an old fruit tree of some description.  My inability to say which one nags at me.  But what is this obsession, I wonder, with being able to name things?  After all, it's only us humans who invented the names in the first place.  It doesn't make the tree less of a tree because I don't know what its name is.  Is it some sort of need for control, as if I can pin down the essence of the thing by naming it?  Or is it just another subtle form of one-up-manship - I can't be a real countrywoman until I know the name of every tree....

I'm now parallel with the farmhouse, higher up the side of the valley to my right, with its back to the trees which crown the top of the hill.  Sounds of chickens and children playing float down to me. In the shade of a tree,more sheep and young lambs are hunkered down, unwilling to move even to get away from the papparazza (me) and her camera.

Beyond the house, the valley closes in; woodland becomes the order of the day, tall trees reaching up to the light, nettles already working hard to justify their reputation. The stream becomes wider and I cross it on a slatted bridge with most of a sapling as a handrail.  Here a track runs across the stream and away up another side valley and just around the corner, nestling in a mess of living and dead trees, is 'Rose's cottage'.  Or what remains of it.

According to 'The Turbulent History of a Cotswold Valley' by Patricia M Hopf, the cottage was lived in by Rosie Bannen until her death in 1991.  In the book there's a picture of Rosie in the sitting room of Timbercombe, as it was known, in about 1980.  There's also a picture of the cottage in 2003, without the slates on its roof, but otherwise in one piece. Now it's definitely a ruin.  Still recognisably a cottage,  but clearly not for much longer.  The centre of the house is completely collapsed. Nettles grow up through what was once a window.  Ivy has colonised the back wall and trees lean towards the ruin as if waiting their chance to move in.  I've said I won't get too deeply into the history of the valley (which would be a whole project in itself) but this is such recent history.  Plenty of people would still remember Rosie Bannen, and it's a little shocking how quickly her house is disappearing. Shocking, but also oddly reassuring, that given a following wind nature can take back the ground from under human feet so swiftly.

Another tributary of the main stream runs down the side valley past the cottage and joins up with the main stream.  Must come and walk the side valley at some point.  From here on, the Dillay becomes a much more grown-up stream, the sound of it changing like a boy's voice breaking.  With a hint of intrepidity, I clamber through nettles and and over dead wood and wade through drifts of cleavers in order to follow the stream while the footpath runs more sensibly higher up the valley.  Ahead of me struts a cock pheasant shining in his spring plumage and supremely unconcerned by my presence.  I feel I should warn him not to be so careless around humans.  I seem to remember hearing that despite appearances, pheasants are no dumber than most birds - it's just that, thanks to us, they don't live long enough to acquire the woodland version of street wisdom or to hand it on to their children. 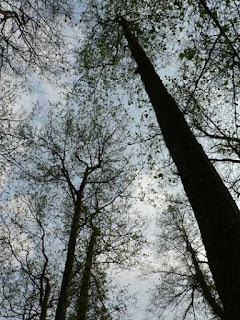 Up where the footpath is, there's an open grassy hillside brightened by wildflowers and sunshine, but down here by the stream it's cathedral-gloomy under the reaching trees, the ground boggy and covered in dead wood and ferns.  It feels ancient, and not cosy.  I remind myself to look up, and marvel at the intricate tracery of branches above me, still only sparsely covered with leaves.  Following the stream, with no footpath as a guide and surrounded by tree cover, it's easy to lose track of where you are in relation to everywhere else in the valley.  I realise that I may already be out of the Barrington's land and into the nature reserve next door.  I also realise that a lot of time has passed without me noticing, and I should have been home half an hour ago.

Climbing up the hill a little to find my bearings, tall fences and other pheasant-keeping paraphernalia tell me I'm still on Barrington land.  I may well be close to the nature reserve boundary, but it's late and I've no time to make sure.  I head back up the stream to the farm, arriving at the same time as an unexpected thundery shower, the thudding of raindrops obliterating my last few remarks to myself on the tape recorder.

Google map of this walk
Posted by Amanda at 15:15