Walk 27: In the steps of the animals - Church Field (revisit)

Friday 13th, eh?  I shall have to watch my step.  It's a beautiful but chilly morning, after a frosty night.  A couple of weeks ago we had a really hot week and everyone got sunburned, followed by a very wet week, and now we seem to be back to winter.  I'm taking advantage of the fact that everything isn't yet growing like topsy to revisit Church Field.  My first walk here was in the early autumn, with a whole summer's growth to contend with.

As far as the birds are concerned, it's now well into spring.  There's a bluetit sitting on 8 eggs in my nestbox and home and plenty of birdsong here this morning, with a buzzing base line of flies and bees.  Last time I was here, the old grassy trackway which leads down into the field was flanked by battalions of nettles and summer flowers.  Today there are few flowers as yet, and the nettles are all still small and trying to be cute. Young leaves are rather like young animals - all neat and perfect and so much more charming than the grown-up version.  I remember a multiplicity of shapes of seed heads last time, and one or two of them are still here, because the field hasn't been cut. There are also quite a few ladybirds, the first cowslips, and a dusting of blue birdseye.  The sun is shining obliquely towards me from Swifts Hill, throwing deep shadows behind the hedgerows, breaking the landscape up into areas of heavy contrast. There are leaves on the smaller trees but not most of the larger ones, so I can still seeing strong shapes of individual trees in the general shadow. I pause to take photos - I'm working on an idea for what I think of as 'slices of landscape', narrow sections of the valley view with particular interest in terms of colour or shape.  There are plenty to choose from.

The grass here is springy and soft, and apart from the path, very tussocky, like an ancient feather mattress.  It's beginning to recover its spring green from underneath, but there's plenty of tall brown died-off stuff because it hasn't been grazed this winter.  Dandelions are starting to come into their own, and I also spot celandines, and a tiny, perfect spider sitting in one of them.  A butterfly goes by me in a flurry of movement, too fast to be identified.  I hope it isn't regretting its decision to emerge, given the chill today.

At the bottom of the remains of the track, where it dives into a wooded area, nettles and wild garlic are fighting it out for ground space and the wild garlic is winning.  A few garlic flowers are already out, delicate as old lace, and the garlic leaves make strong sculptural shapes on the ground.  A strong smell of garlicky greenery surrounds me and orange-bottomed bumble bees are bumbling round the old silk mill spring and its shrine of stones.  The mill ruins are much more visible than before; I can now see that the wall runs all the way along the bank, and I can also see, about 15 feet away, a small curved archway sunk deep in the ground.  Could this be the top end of the culvert which I saw the other end of, down by the stream?

This wooded bank is a lot more accessible now than it was in autumn and small animal paths are visible, criss-crossing through the garlic.  I follow one of them downwards until it peters out in a series of holes beneath the roots of a trio of beech trees growing on a sort of hummock.  The trees have all grown into one another, their roots entwined, and on one side the hummock seems to have fallen away beneath them, leaving a whole section of roots sitting on thin air.  To add to the weirdness, one of the trees has a rather  elegantly-stencilled number on its side.  By clambering precariously round and through a holly bush I can get round behind the trees and see that they appear to be growing on great hunks of stone.  Is this part of the old mill, or a natural stone outcrop? Impossible to tell.

Following another animal path leads me to another hole under the roots of a tall tree hung with thick and furry ropes of ivy, like cats' tails.  It's well dug around, so perhaps it's a badger sett, and I've been following a badger path.  The path continues on its meandering way around this sloping bit of scrubland.  Bits of stone appear through the undergrowth in many places, and here's a tree growing on what looks like the remains of a wall.  I wonder what you'd find if you dug down into all this - the remains of more of the mill, maybe?  The path runs on down into the field.  If the whole field is an L-shape, I'm in now the short section of the L, and last time this part was so covered in deep undergrowth and head-high nettles that it was almost impossible to navigate.  My animal path continues down to the stream through the thicket of blackthorn and trees and bushes fringing the water.  I could follow it to the water if I was prepared to bend double, but I'm not.  The blackthorn is covered in blossom and the sun right behind it turns it to flurry of pearl.

I find a less exciting way to the edge of the stream.  Here is the island effect I saw before, between the main stream and a dry ditch, and at one end of the ditch is a stone arch identical to the one up by the mill ruins.  QED, I reckon - this is the other end of that culvert.  The ditch meanders round the island and joins up with the main brook, so presumably was the run-off for the culvert.  My noisy footsteps on last year's leaves startle something large in the undergrowth, which blunders away unseen, and something small, a wren, which, being a wren, remains to shriek abuse at me. 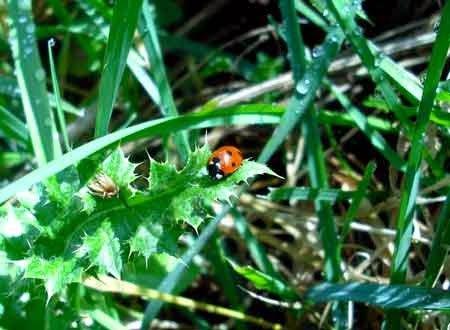 Following animal paths has served me well so far, so when I find another one at the further end of the stream, by the boundary with the next field, I follow it down the bank and beside the small tributary stream which runs down from the bend in the road, frightening blackbirds into spiky song as I go.  I couldn't get down this far, last time, for the undergrowth.  The bank is dotted with ladies-smock and primroses and I can hear a chiff-chaff but not, of course, see him.  Here is a hollow tree decorated with attractively minimalist ivy.  I peer inside it, but because I'm not Gerald Durrell, it's empty.  I can see that the path continues right down to the water, but not get there, because a tree has fallen across it, creating an arch which is just the right height for, say, a badger to pass underneath but not a clod-hopping human.  Back up the bank, now, then, and diagonally across the slope to get back to the gate, just in time to see a buzzard spread his wings and float down from a tree, over my head and into the valley.