I'm on my way back down Steanbridge Lane, having now got permission to go and look at the bit of stream which, after leaving Down Farm land, runs through the garden of Upper Steanbridge Mill and then under the lane to join up with the Dillay running through the Fairgrieves' garden in the other half of the mill.  And if that sounds confusing, it's because the garden of Upper Steanbridge Mill is actually on the other side of the road from the house itself, and is a narrow triangular tongue of land along the stream, projecting into the Down Farm fields.  This is going to be another short walk in distance (less than 100 yards, I judge) - but in time?  Who knows?

On my way down the lane I meet friends from the village returning from walking their dog.  They describe having seen a fox and two deer at unusually close quarters.  As I discovered after my recent fox cub experience, there's an element of mild competition about discussing wildlife encounters with local friends, of the 'I'll see your two deer and raise you five fox cubs' variety, which is quite entertaining, as well as instructive, since it makes you realise that for people who are out in the valley regularly, such as dog walkers, there is plenty of wildlife to be seen.

A brilliantly sunny morning, but chilly for this time of year, feeling almost autumnal, which is slightly worrying as it's still only early July.

I enter the garden via a gate from Steanbridge Lane.  The first part is relatively garden-like, with mown grass and a vegetable plot and summerhouse, but also plenty of trees and laurel bushes.  A fallen willow has been creatively propped to form a children's climbing frame and there's a platform in a tree which ought to be brilliant for watching birds.  Then the domesticated part of the garden simply stops, and I'm in woodland, following a slender green path winding through the trees.  The word 'bosky' must have been invented for this particular path. Once again there's that sense of being in a secret place - I can't see the outside world at all.  I tell a lie - I catch the odd glimpse of the racehorses grazing in the fields beyond.  But there's no sense that they might see me.  In fact, I feel I am walking unseen by all eyes except the birds chittering disapprovingly in the trees above me.  These seem to be youngish trees, for the most part, tall and slim, many of them ash.  There are occasional piles of old logs which have been left alone to be covered by moss and ivy and other creeping plants and must be appreciated by the local wildlife.

Pause for a Chris Packham moment as I discover a little mound of poo.  All those of a sensitive disposition, look away now.  This does not look like the usual (i.e. dog's) and some of it has a twisty tail coming off it which (I seem to remember from Springwatch) means it could be fox.  Nearby are signs of shallow digging, so someone, fox or otherwise, was busy here recently.  Why do I get excited about finding signs of the other mammals who share this countryside with me?  As my earlier conversation with my dog-walking friends indicates, there are plenty of them about.  Can't imagine a badger nosing thoughtfully at a dropped crisp packet and saying 'Hmm - looks like human; wonder what they were up to last night?' 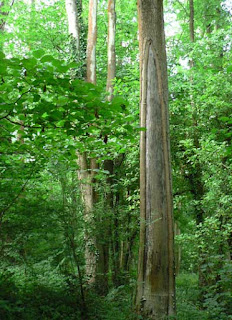 The woodland gets narrower and narrower until it comes to a stop up against fences on both sides.  I'm now at the apex of the triangle, and the point where I stopped on my last walk, but on the other side of the fence I saw the stream disappearing under.  The sound recorder and I stand here for a while, listening to the sound of the stream squeezing itself past the debris which has accumulated against the fence.  There's an unusual-looking tree in front of me.  I think it's an ordinary ash tree, but it has lost a long, v-shaped swathe of its bark, like a tear in a piece of paper, up to a height of about 10 feet.  Unfortunate for the tree, but it gives it a most striking appearance, revealing watermark-like patterns in the heartwood, and orange tinges along the torn edges of the bark .  I wonder what might have caused this - if this was Africa, I'd have guessed elephant, but we only have squirrels here. I'd have thought it would take a squirrel an enormously long time to achieve the same effect.  Pause to ponder the possibility of an elephant-sized squirrel lurking somewhere in this woodland.  Return of The Beast of Slad?

I've got stereo stream noise in my ears; in the left ear, the sound of the stream forcing its way noisily past the fence and its accidental dam of debris, and in the right ear the rush of another set of miniature rapids 10 or 12 feet further on where it flows round a bend and drops over a lip of stones.  In fact, this bit of stream is noisy along most of its length; its bed is rocky, and every now and then a jutting rock creates a little rapid, or the roots of a tree induce a tiny waterfall.  (I'm piling up the sound recordings now.)  Where branches have fallen across the water, creating mini-dams, you get a brief pool of smooth water above the dam, then rapids below, in some places a series of them, like a necklace of smooth pearls held together with twisty ropes.  This transition from smooth water to the texture of the rapids fascinates me for some reason I can't quite put my finger on.  I try to draw it, to find out, and utterly fail to capture what I'm seeing, only succeeding in fixing it in my mind as something to remember.

I have an odd sense of freedom because this is such a short stretch of stream to cover and I haven't arranged to go any further today, so I don't have to worry about how long it will take me to walk it and can spend time exploring it in as much detail as I like.  Also, being a fenced-off garden, it's safe to dump my bag of art kit by a tree for the moment and scramble about the banks of the stream looking closer at things.

Multi-stemmed hazel trees lean down protectively over the stream, accentuating the sensation of hiddenness. It looks to me as though their roots are what's mainly keeping the banks together.  As well as roots, the banks are clad in ivy, hart's tongue ferns, brambles and nettles, with a scattering of pink and yellow wildflowers like battenberg cake crumbs.  There must be bluebells here in spring; their trefoil-shaped seedheads are visible in some places.  In a muddy area I find vague signs of some small animal having come down to the water to drink, and in a steeper, undercut section of bank, shaded by curtains of trailing ivy, I spot a significant-looking hole, perhaps three or four inches across.  Is it a lived-in hole, I wonder?  If so, by who?  Vaguely remember that water-vole holes can be identified by neatly munched 'lawns' close by, which rules this one out since there isn't a scrap of grass to munch.  It occurs to me that human dwellings can often be identified in the same way, though not always.  Perhaps this hole belongs to the vole equivalent of someone who prefers paving stones to grass. 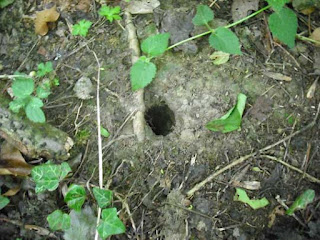 Further on are other, smaller holes.  The undercutting of the bank suggests to me that at some point the stream had more water in it than now.  There are slots in the mud by the stream - maybe deer.

Remind myself to look up.  Because the trees are close together here, they have all grown up very tall and slim with few branches at the lower level, but the ashes, in particular, make a beautifully patterned canopy of gold and green, sun and shade.

My attention is caught by a lot of buzzard mewing going on in the field, in much the same area where I heard a lot of bird fussing going on at the end of my last walk, so I'm wondering if it was the buzzard causing the general alarm then.  I've noticed that I often see them in the same places on my regular walks, so I assume they have regular roosts and hunting areas. 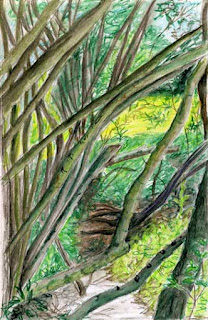 With time to spare, I've no excuse for not making a more detailed drawing, except that there's so much visual stimulation here that it's hard to decide what to concentrate on.  In the end, I choose a view up the stream towards the top-of-the-triangle fence, because of the intricate patterns made by hazel stems across the stream.  While I work, I vaguely register movement in one of the trees in front of me, track it to a hole in the trunk.  This hole is definitely occupied; a wood pigeon is nipping in and out of it, so presumably has a nest there. 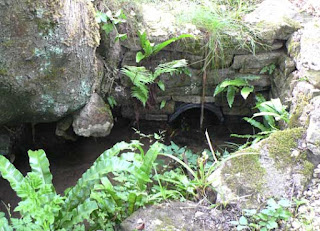 I follow the stream back into the domesticated garden, past a triptych of majestic willows, tall and graceful, past the spears of irises growing with their feet in the water, to the point where it tumbles over a small waterfall and disappears into the mouth of a pipe and under the road.  A few yards from here, in the Fairgrieves' half of the mill garden, is the point where it joins up with the Dillay.  Before leaving the garden, I look back towards the beginning of the woodland path, disappearing into a haze of green, and it strikes me that it could have been the original for the road to fair elfland, the one that (according to the song) runs at right angles to the road to heaven and the road to hell.  Those who follow it disappear for years and return, still young, to a world grown old without them.  This place has something of that other-worldly spirit about it.   Certainly I seem to have spent a lot longer here than I intended.
Posted by Amanda at 18:30