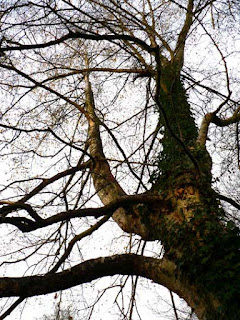 Here we are at what should be the back end of autumn, but autumn has gone in fits and starts this year and seems to be lasting longer than usual.  Many of the trees have now lost their leaves, but not all, - the oaks, in particular, seem to be hanging onto theirs.   It's a semi-cloudy winter afternoon with not too many daylight hours still available and I'm in the garden of Vatch House, being given a guided tour of the extraordinary things that happen to the Slad Brook as it travels through here by the owner, John.  This is a walk out of sequence - if you remember, I had to miss out a section of the brook between Painswick Slad Farm land and Vatch Cottages, and this is part of that missing section, the other part being in the garden of Upper Vatch Mill.

Beyond Painswick Slad Farm, I saw the stream disappearing over a waterfall and into a culvert in the garden of Upper Vatch Mill.  Evidently it then goes around the house (I haven't seen this yet) and reappears from another stone culvert at right angles to the boundary with Vatch House - this much I can see from the fence - before flowing into John's garden.  At this point there's an accumulation of debris from a collapsed wall and fallen tree, which according to John is a legacy of the Great Flood in 2007.  Apparently the pressure of flood water surging out of the culvert carried all before it and swept the wall away.  It's a visible reminder of the power of the flood, when the water was thigh-deep in the lane.  There is also a startling clutch of toadstools clinging to the side of one of the trees like muddy soap bubbles. 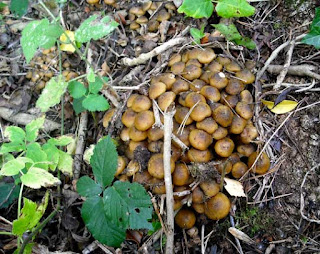 Situated at stream level as it is, most of this garden is flattish, but the valley rises rapidly on either side of it. The stream is about 3 feet wide at this point and running close to the edge of the garden, flanked on one side by alder and ash trees, which mark the boundary with the field next door, and on the other by a flat area which John describes as 'wilderness' and has had a chequered history.   During the valley's industrial past, this section of the stream was extensively reorganised to serve the Vatch mills.  As far as I can work out from local history books, there were several  mills in the Vatch mills complex, including Upper Vatch Mill, a couple of buildings on the site now occupied by Vatch House, and the seven-storey Vatch Mill which once stood in front of Spring Cottages. There was a complicated water infrastructure which served the various mills, in which John's 'wilderness' had a bit-part as a 'balancing pond', filled from a spring on the further side of the garden.  At some point in more recent years the old pond was filled in and became a tennis court, which was eventually abandoned, and is now a haven for the likes of nettles and rose bay willow herb.  John has an ambition to restore the balancing pond and take its run-off into the former swimming pool, now lily pond, built next to it by a former owner.

Through most of the garden the stream flows in a man-made leat which runs along a bank and straight as a die towards the back of the house.  According to John, it's now at the lowest they've seen it in the four years they've lived here, probably as a result of the dry summer.  Halfway along is a massive multi-stemmed tree - hazel? alder? I'm still getting them mixed up, even now - the largest I've seen so far, anyway, with a great mat of roots trailing in the water which causes the stream to chatter noisily as it struggles to find a way round.

There are some sycamore trees here, which are not as common as you would think along the stream, plus a couple of slim and elegant birches.  As I approach the house, the winter sun is fast dropping behind it and the last golden rays are lighting up the fine haze of small yellow leaves still clinging to the birch branches and reflecting off the pale bark of the trees so that they seem to glow all over.  There is that feeling of pleasant melancholy which I associate with late autumn, when everything is dying back and revealing its beautiful bones.  A scatter of windfall apples lie on the path amongst a litter of dead leaves.

The stream now divides; one arm of it continues along the leat, directly towards the back of the house, while the other arm branches off at right angles, descends quite steeply by a series of steps to run parallel with the house, then turns left towards the front of the house, round two sides of a square.  If you were feeling poetical in a Victorian sort of way, you might say that the house sits in the arms of the stream.  Though that might suggest rather too kindly a relationship, given its history -' in the clutches of the stream' might be nearer the mark.

I elect to follow the leat along the back of the house, where it becomes no more than a trickle of water, choked with plants, and ends abruptly in a sort of earth bank.  Originally, it would have continued straight ahead and into a culvert behind the house which then took it across the lane and into the mill pond, up behind the big mill at Spring Cottages.  (This mill pond is still visible as a swampy area of woodland behind an earth bank.)  But the old culvert is long blocked off and the water now runs off at a right angle, under a bridging chunk of concrete, and down a steep mill-race into a stone channel which carries it right underneath the back of the house, round the corner and into another culvert at the front of the house.

Unable to go further, I return to the other arm of the stream, the decorative arm which branches off from the leat in a series of steps, created by low stone-and-tile walls which the stream doesn't exactly flow over, more through, with a flat pond behind each wall.  The whole thing wanders prettily through the garden before veering back towards the corner of the house where its twin emerges.  Here, things get even more complicated.   The water from the race which goes under the house then dives into a Victorian brick-built culvert (John takes the lid off an inspection chamber to show me water gurgling away in the depths) whereas the water from the decorative steps runs into a modern plastic pipe.  Both then run in parallel under the driveway to join up with the main culvert which carries the reunited stream under the road and down the small lane opposite towards Spring Cottages.   Whew!  With me so far?  There's a manhole cover at the point where they join, from which issues the sound of rushing water, particularly after heavy rain.  During the flood, I remember the water absolutely foaming out of it.

That's not the end of the cats-cradle of water in this garden, though.  On the further side of the garden, John shows me another, much smaller stream which comes down the hillside, through the garden of Vatch Cottage, across the field next door and into this garden where it runs in a narrow stone channel and then, via a series of stone steps, executes a bizarre u-turn back along itself and down towards the house.  John reckons that originally it went into the old balancing pond, and that after the pond was filled in, it was given a new life as another bit of ornamental water, and directed back into the garden. Hence the strange hairpin bend in the middle of it.  After coming down the levels in a mini-version of the main stream's pools and steps, this spring water runs back down the garden and into a pipe - John removes another inspection cover to show it trickling below - after which, it presumably joins the main stream somewhere, though no-one knows where. 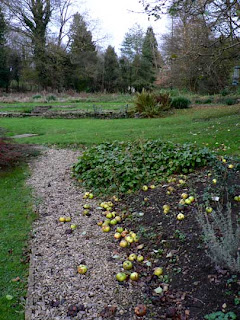 Confused?  You and me both.  After John has left me to wander round the garden with the camera, I have to walk the whole thing again to try to get the water system sorted out in my head.  This is the most visual evidence I've seen so far of the industrial past of the stream and this valley.  It's sad, in a way; like an abandoned house, or a once-busy road now going nowhere, the purposeful straightness of the leat ending in a purposeless bank, the carefully channelled spring water now wandering about the garden without a job to do, and the whole complicated water-weaving disappearing into a bodge-up of pipes and culverts.  On the other hand, the stream has a life of its own, no matter what we do to it, and it brings movement and interest to a garden like nothing else can, even in the dull days of autumn.


Google map of this walk